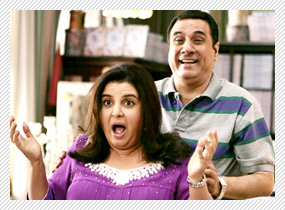 When two Parsis fall in love there's bound to be friction. They are such a talkative community. At least that's what we get to know from the eccentric bustle that our movies tend to create when dealing with the community.


While watching Bela Sehgal's sweet tender story of Shirin and Farhad passed the age of marriage, determined to find love and companionship in each other's unexciting company one immediately thought of Basu Chatterjee's Khatta Meetha and Vijaya Mehta's Pestonjee. The first, because it was a film about a widow and a widower from the Parsi community overcoming their children's opposition for an autumnal marriage.


Vijaya Mehta's Pestonjee was remarkably accurate in portraying the benign quirks of the Parsi community, so is Bela Bhansali Sehgal. Though not a Parsi herself, she plunges into the centre of the dwindling community's eccentricities without trying to give the characters any kind of a novel existence beyond what they are stereotypically known for.


The love story of Shirin (Farah Khan in a remarkably poised debut) and Farhad (Boman Irani, as natural as ever) holds no surprises. They meet, they smirk, they walk hand-in-handâ€¦he mistakes her invitation for coffee in her home for suggestion for sex. While she makes him coffee, he waits for her undressedâ€¦Andâ€¦you know the rest.
The portrayal of Farhad's mother(Daisy Irani) and grandmother(Shammi) reveals the film's writer Sanjay Leela Bhansali's penchant for loud extroverted singing, dancing, chortling aging woman characters, e.g. Helen in Bhansali's Khamoshi: The Musical and Kirron Kher in Devdas.


Beneath all the feminine giggles (bras and panties, hee hee) and male guffaws ("tera rocket kab phutega"?) that surround the theme of courtship between a middle-aged couple for whom life is neither a picnic nor a funeral, director Bela Bhansali Sehgal seeks out silent passages of undulating sensitivity.


Listen carefully. The film makes terrific use of silent moments that are becoming progressively rare in our cinema. Farah Khan is specially reticent, a mysterious smile hovering in her eyes constantly as though she knows that life , and life in the movies, are a secret joke. In her scenes with her comatose screen-dad, Farah's eyes melt with affection.


Yup, she handles the emotional moments better than the comic.

Boman seems to be reined-in. It's like a new singer, say Shailendra Singh, when he had to sing duets with Lata Mangeshkar in Raj Kapoor's Bobby. She had to hold back. Boman does that quite well to let his debutante co-star get comfortable with the camera.


Sehgal has cast true-blue Parsi actors in all the roles, big and small. In fact I could hardly spot any non-Parsi in the cast!


The comic vein tends to get unwieldy at times, as if the attempt to be funny has taken a toll on the characters' sense of self-identity. We get a Parsi wacko (Kurush Deboo) who runs amok with an antique gun threatening to kill anyone who comes in his way. He doesn't make much sense in the scheme of the plot. But then, what makes sense in life other than the senselessness that we see all around us?


Bela Bhansali doesn't try to make sense of the chaos. She flows with the chaos seeking laughter in the eccentricity. Hence when an old Parsi gentleman constantly writes love notes to Indira Gandhi you know he has lost it. And you smile, because eccentricity is a pre-condition in a rom-com about two over-the-hill Parsis, one of whom sells lingerie and meets the woman of his dreams when she comes to buy a brassiere.


Luckily the film goes beyond innerwear and seeks a place in heart. The director emerges with some truly heartwarming moments between Boman and Farah. Unki love story to nikal padi. The debtante director has carved an endearing relationship between the unlikely couple. The romance is embellished with charming little incidents that add beautifully to the pacy perky pastiche of Parsi proceedings. And if Boman is confidently in character as a 45-year old who surprises himself by finding love, Farah is no less confident. Is this really her first film?