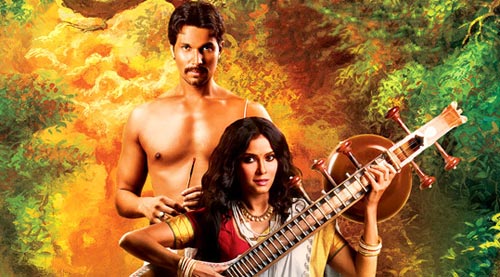 He's known as the father of calendar art. Raja Ravi Varma, played with arresting arrogance by Randeep Hooda in Ketan Mehta's exceptional bio-pic, brought the gods out of the temples and made them accessible to the masses.


And now Ketan Mehta, that artiste extraordinaire who paints his characters with the brightest colours of life, has brought the enigmatic ambivalent life and art of Varma out of the closet into the portals of palpable accessibility.


As depicted in Rang Rasiya, the life of Raja Ravi Varma hovers heftily between the sublime and the mundane. He is at once an artiste and an entrepreneur, a lover and a debauch, a giver and, in his own words, a small selfish petty artiste. Hooda goes through the many phases of the artiste's life with first-hand familiarity.


Among many other things Rang Rasiya is an illuminating exposition on of a life that defies all demarcations and analysis. Raja Varma was so many things to so many people. To thousands of Hindus he's the guy who made worship of the gods accessible to all. To those close to him he was a vain and selfish artiste who thought only about himself. To encapsulate such a scattered life in a 2-hour film is a near-impossibility.


Mehta manages the miraculous. The film portrays the artiste as an icon and a rogue. An indolent genius who chances upon an ingenious formula to immortality: if Man can't go to God, bring God to Man...


Rang Rasiya is an extremely articulate film that never gets weighed down by its inherent erudition. The thought-processes that define the age-old debate between Art and freedom of expression are given shape in fleeting scenes of marauders breaking down the doors at art gatherings. Scarily, the desecration of art, and the sub-culture of moral policing are shown to be as rampant in the 19th century when Varma took the Gods out of the elitist temples, as they are now.

Ketan Mehta never over-emphasizes the point of freedom of expression. Ironically his lucid film often shows the artiste misusing that freedom for his own selfish benefits. There are images in the film of destruction and creation, sometimes in the same range of vision. And if we have Ketan Mehta to thank for bringing Raja Ravi Varma alive we have Ketan's cinematographer Anil Mehta , his art director Nitin Chandrakant Desai and his music composer Sandesh Shandilya to thank for representing the director's vision in images colours and sounds that are at once scintillating and subtle.


At the centre of this masterly portrait of an artiste as a self-seeking pioneer is a passionate love story. Raja Ravi Varma's adoration and eventual abnegation and destruction of his muse Sugandha (Nandana Sen) is put forward in images visceral yet vivacious and spontaneous images. The relationship is as steeped in the tragic ethos as the one between Devdas and Chandramukhi.


Floridity is anathema in Ketan Mehta's costume drama. Rather than focus endlessly on recreating the period the director delves into the morality and mindsets that governed those times when prudery was frequently a disguise for hypocrisy. Mehta strips through the veil of double-speak. The dialogues between Raja Ravi Varma and the vanguards of organized Hindu religion are barbed acerbic and thought-provoking.


Wondrously the film is never weighed down by pontification and verbosity. Painted in the distinguished yet disembodied colours of humanism Rang Rasiya brings to vivacious life the very compelling love lust and defiant art of Raja Ravi Varma.

Standing tall at the centre of Mehra's magnificent treatise of the artiste and the morality of the times is Randeep Hooda. He lives and breathes life into Raja Ravi Varma's character. Admittedly some of Hooda's expressions are way too wry and cynical to be convincing in the 19th century. But over-all he gets every aspect of the character right.


Luckily Hooda has some outstanding co-stars who prop up his performance without patronizing the protagonist's passion. Nandana Sen as Raja Ravi Varma's muse peels off all the coyness to portray a Fallen Woman who is deified through the artiste's art. She has two extremely moving monologues which she delivers with feeling. Gaurav Dwivedi as the narrator and Ravi Raja Varma's overshadowed sibling, Jim Boeven as Varma's German ally and friend, and the lovely Freyna Wazheir as a Parsi admirer stand out in the supporting cast.


One of my favourite moments in the film is between the ever-reliable Sachin Khedeker and Hooda where Varma, demoralized by the turn of tides in his life is told to smile and welcome a new life.


Watch Hooda's extinguished eyes in this scene. The actor isn't faking it.


A masterpiece by any reckoning Rang Rasiya brings to life the father of calendar art. There is a dazzling display of colour, desire, erotica, drama and emotions in this richly textured saga of art and immorality. Ketan Mehta the maestro of passionate parables gets it right one again. This is his most intricately woven and enchantingly textured drama since Mirch Masala.


Among the many startling ideas that emerge from Mehta's majestic exploration of religion, art, sex and the male ego is the one suggesting that Dada Saheb Phalke's dream of making a film was funded by Raja Ravi Varma.


Thank God and Varma, then, for the birth of Indian cinema.
And thank God and cinema for Ketan Mehta who lives to tell the tale. If you love art and cinema, and cinema as art, then don't miss this one. The best film of the year.