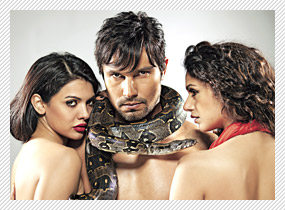 If the truth be told, the essence of this neatly-packaged thriller about what lies beneath is obtained in the second-half where the whole philosophy of the mirror-image and the reflection of the soul in the individual conscience is given a walloping visual manifestation. Hats off to debutant director Vishesh Bhatt for bringing to life that tricky zone which separates mirage from reality.


The film opens on a rather unpromising note. We see a sexy restaurant manager (Sara Loren) take a drunken lout home. Just why she's do anything so foolhardy in today's day and age of heightened sex crimes, is beyond logic. They are soon in an intense relationship punctuated by bouts of monotonous pseudo-Sufiana songs that add nothing to narrative momentum.


Suddenly mid-way through the narrative finds its bearings to strike a deep chord within the plot's heart and emerge with a cat-and-mouse game where the two ladies, Aditi Rao Hydari and Sara Loren indulge in a cat-and-mouse game that leaves the film's official hero hopelessly marginalized.


While it would be unfair to give away the plot, suffice it to say that if you are lucky enough to have not seen the original this film would knock you out of your seat. The entire drama is done in the style of a chamber-piece replete with remarkably precise art dÃ©cor detailing.


While Raju Singh's background score adds to the aura of foreboding and, yes, Sunil Patel's cinematography is impeccably radiant it is Aditi Rao's performance as a woman trapped in a maze of her own suspicion who imparts a sense of gamine-like fun to the inherent terror quotient of the drama.


Indeed, Aditi is the hero of Murder 3 furnishing a sense of foreboding to the kinetic goings-on. Sara Loren as the girl on the opposite side of the mirror image has a fetching face and fairly expressive body...language! But the talented Randeep Hooda's drunken drawls and brooding machismo are now getting repetitive. Time for a reinvention, Mr Hooda.


In terms of visual and emotional fluency and in connecting the supernatural content to a compelling context Murder 3 moves far ahead of the first and second installments of the franchise. Mired in a mystique that constantly unravels whispering dark secrets the film marks an assured directorial debut for Vishesh Bhatt.