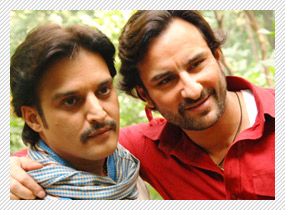 Saif Ali Khan is getting to do a variation on one of his favourite films the George Roy Hill classic Western Butch Cassidy & The Sundance Kid. In Bullet Raja, director Tigmanshu Dhulia has relocated the original buddy film's concept from the Wild West to Lucknow.


While Saif plays one of the trigger-happy protagonists, the talented Jimmy Shergeil plays the other lead in Dhulia's Bullet Raja, so named because of Saif's character's penchant for firing bullets and riding the motorcycle brand Bullet.


A well-informed source close to the project informs us, "Saif and Jimmy are akin to Paul Newman and Robert Redford roles from Butch Cassidy & The Sudance Kid. Irrfan comes into the story midway as a ruthless cop who is summoned to stop Saif's no-holds-barred outlawry."


According to the source Bullet Raja portrays Saif as the fastest gun in Lucknow.


"And he loves it. He is exploring the adventurous royal side of his personality, firing guns, screeching down dusty roads on his trademark Bullet mobike, looking for a new adventure every day."


One learns that Saif is completely into getting out of his Oxonian cultured accent and royal habits to get a hang of the colloquial Uttar Pradeshi dialect.


The director Tigmanshu Dhulia informs, "Saif ko bahot mazaa aa raha hai. He is the only star-actor after Aamir Khan. He has the draw and the ability to get completely into character. I am his dialogue coach on location here. I brief him very closely on how to deliver his lines. He listens, absorbs, and practices the dialogues till he gets them just right."


Dhulia feels Saif is well-read enough to imbibe any character, no matter how alien to him. "He possesses a world-view, has a sound knowledge of music, literature and the fine arts. He has taken possession of Bullet Raja's character. He lives the role even when the camera is off. He wants to know what the character is doing when he is not in the frame. That kind of dedication I got when Irrfan Khan played Paan Singh Tomar."


Bullet Raja is a massy actioner with Sajid-Wajid's populist numbers peppering the proceeds. One hears from very reliable sources that Saif and his co-star Sonakshi Sinha would be jiving to a popular Govinda number from Raja Babu ('Pak Chik Pak Raja Babu').


Interestingly, most of Tigmanshu Dhulia's films so far have been UP-based.


Reasons Dhulia, "So many films are being shot in and around Lucknow. Abhishek Choubey and Sudhir Mishra are coming here for Dedh Ishqiya and Mehrunissa. I am coming back for Milan Talkies right after I finish Bullet Raja. There's no reason why I can't make films out of Uttar Pradesh."