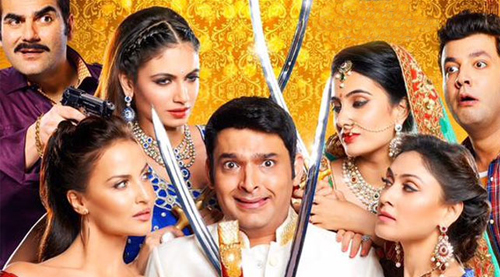 Just before interval Kapil Sharma, the super stand-up comedian has a drunken monologue. It is the baap of all boozed-out outbursts, lengthier than anything, even than the one drunken Bachchan Saab has done in Amar Akbar Anthony or Hum.

But hasn't anyone told Kapil? It's not the length; it's the performance that matters. It's downright embarrassing to watch Kapil do serious dramatic scenes that run into reams of dialogues and spectrums of facial expressions.Specially mawkish and embarrassing is the finale speech where Kapil has to convince all the 5023 characters and the audience why he needed to marry three unsuspecting women and was about to marry the fourth.It's all because Kapil has a big heart, you see.

To convince us in this day and age that polygamy is okay one needs an actor of Naseeruddin Shah's credibility. Kapil? Wellâ€¦. Ummmmâ€¦. Let's just say he sparkles in delivering the occasional one-liners but falters when given to do the more serious stuff.

And it really speaks volumes about the debutant leading man's abilities when the supporting cast is funnier than he is.Varun Sharma as the hero's lawyer, Arbaaz Khan as a deaf don, Jamie Lever(Johnny Lever's daughter, a prized comic talent) as the busybody maid servant and Supriya Pathak-Sharat Saxena as the hero's estranged parents rediscovering each other even while their son, who should have been spanked more often while growing up, discovers the pleasures of polygamyâ€¦.these are the backbones of the comedy.

So meet the hero SRK, short for Shiv Ram Kishen. He has three wives living on three different floors. He blows kisses to all three while leaving for work and, ha haha, the wives are so dumb they don't realize they are taken for a ride.The wives are played by three actresses who are strikingly similar in their inability to perform. They all seem to be distant cousins of the dumb wives' club from Indra Kumar's Masti.

Off and on Abbas Mustan's purported comedy will remind you of the Govinda comedies directed by David Dhawan and Anees Bazmi's Sandwich. To his credit, Kapil carries off the lighter moments with Ã©lan. But he is disastrous doing conventional romantic songs and other heroic stuff.

Finally, it is the supporting cast that saves the day.

But to justify and parody polygamy in this day and age? God forbid!