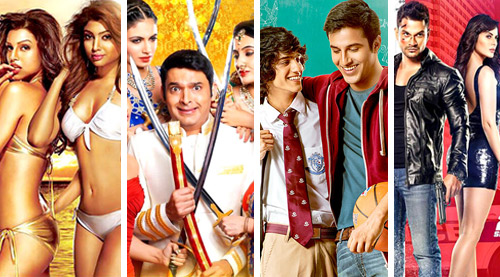 Come Friday, and it's a tussle for tickets at the box-office, with four small-budget films vying to get our attention. But will they all succeed or would only one or two of them get a decent viewership?


First off is Madhur Bhandarkar's Calendar Girls, which looks like the kind of cinema Bhandarkar has patented. A bunch of girls grappling and guzzling through a glamour industry. Madhur returns to the film industry after two debacles, the uncharacteristic comedy Dil Toh Bachcha Hai and the trademark sight-snort-sniff heroine's rise and fall tale in Heroine. Calendar Girls has no face value but plenty of torso value. Apparently, babes in bikinis spell big bucks at the box-office.


The second release this week is the Kapil Sharma comedy Kis Kisko Pyar Karoon, where television's comic superstar makes his feature film debut in a very Govinda styled comedy. For his large-screen outing, Kapil is sandwiched among three wives and a girlfriend. Whether audiences would want to pay 200 rupees to see Kapil's antics is a question that has no ready reply. We have seen television stars flourish and flounder in the past.


Thirdly, there is an interesting coming-of-age campus drama Time Out directed by first timer Rikhil Bahadur which delves into forbidden areas of the youth's psyche such as thwarted ambitions and sexual orientation. The film's producer Viacom 18 would give this small film a limited release in the big cities.


Finally, the very underrated and underused Kunal Khemu returns in a thriller Bhaag Johnny directed by Shivam Nair, who has earlier done a film with Khemu's wife Soha called Ahista Ahista. Kunal Khemu describes Bhaag Johnny as a "high concept thriller and a story told in a way it's never been told in Hindi cinema."


We'd like to believe Kunal. But would the film survive the competition from three other releases?


Says trade analyst Taran Adarsh, "Four films in one week? That's definitely a crowd. How will these films manage ample screens, appropriate shows and abundant footfalls is what sets you thinking. Holdover titles like Welcome Back, Hero And Katti Batti will also exist in cineplexes. Ideally, there shouldn't be a clash of four or five films a week, but have we ever learnt from our mistakes?"


Trade analyst Atul Mohan feels the audience is not prepared to give four films a chance during the same week. "Clearly, only two releases of this week are most talked about. One is Madhur Bhandarkar's Calendar Girls for Bhandarkar' s brand of cinema, and the second is Kapil Sharma's graduation from small screen to big screen in Kis Kisko Pyar Karoon. Time Out is having very limited release and Bhaag Johnny lacks face value."