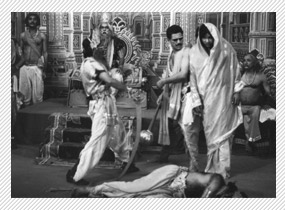 It was the year before Mrs. India Gandhi was assassinated. The nation was not in the best of moods. There were raised voices and frayed tempers prevalent across the nation as corruption and intolerance reached an all-time high. Given the milieu Jaane Bhi Do Yaaron (JBDY) chose to laugh away the bruiseâ€¦There is a sharp zaniness about JBDY which serves as a scathing antidote to the growing sense of collective dismay that the nation faced as extremism and inflation hit the nation hurling it towards damnation.


Many regard JBDY as the funniest Hindi film ever made. I am not too sure. I sense of deep somberness behind the giggles and guffaws. The plot about two out-of-work photographers named, hold your legal notices, Vinod Chopra (Naseruddin Shah) and Sudhir Mishra (Ravi Baswani) has episodes of acute hilarity and interludes of absolute anarchy. You know from the faustian flavour, the Shakespearean fervour and frenetic pacing, that there was an abundance of improvisation on the sets. You also know as you watch the film's newly-restored edition that the film was made on a shoe-string budget which afforded meager finesse, and practically no re-takes. Nope. Nothing can restore the frugality, austerity and begging-bowl crisis that the film had to face.


The actors had to literally survive by their instincts which could only take the narration this far and no further. Frequently the gags run out of steam and you can see the actors groping in a creative darkness to emerge with flashes of genuine inspiration. There are too many references and cross-references to politicians and scams. If you weren't born back then when the film was first released, you are doomed.


The nexus between politics and journalism is brought out through a character named Shobha Sen (Bhakti Bharve) a hard-nosed newspaper editor who uses our two heroes to get an expose on a builder named Tarneja (Pankaj Kapoor) and his murky collaboration with a municipal officer named d'Mello (Satish Shah). D'Mello soon ends up as a corpse in a traveling coffin that leaves us chortling heartily or coughing uneasily, depending on how far we are willing to accept the opulent oeuvre of the outlandish and the outrageous that the film throws forward.

In one sequence we see the dead-drunk builder Ahuja (Om Puri) driving into the coffin carrying the dead d'Mello thinking it's another vehicle. The sequence is funny only if you are hell bent on enjoying the goofiness of a grand high-school reunion fete bringing together grownup professionals who decide to "have fun" for one evening even if some of their actions make them look downright silly.


Check out the sequence where a time bomb is planted by Tarneja and his moronic assistant (Satish Kaushik) under the chairs of Bhakti Bharve, Naseer and Baswaniâ€¦Or the episode where Naseer and Kaushik speak on the phone to each other in the same room. The humour is so slapstick you laugh in sheer embarrassment.


In JDBY everyone is out to have fun. It's a very boy's kind of nudge-nudge-wink-wink fun where the brunt of the joke is the system that fosters and encourages corruption on every level. The characters discuss malpractices without shame or purdah. The cast is mainly masculine. The two women in the cast Bhakti Bharve and Neena Gupta behave like the boys.


Bharve's hard-nosed journalist's act is astonishingly unladylike for those times. She uses her "charms" (which are entirely a subjective matter since she doesn't appear overly seductive in any sense) to outwit her male adversaries and to make Vinod Chopra (Naseer) putty in her hands. In the end when Sudhir and Vinod are framed for scams which they had set out to expose Shobha Sen walks away from the duo leaving them to face the music. There is a unmentionable 'b' word for such exploitative women.


Among its many pioneering achievements-and that includes the legitimizing of goofy comedy as political satire-is the use of the inspirational song Hum honge kaamyaab, a desi rendering of the song 'We shall Overcome' , a protest song conceived for the African-American Civil Rights Movement. It went on to acquire a renewed popularity through its ironic usage in Kundan Shah's film.


To this day Jaane Bhi Do Yaaron remains a crazy film, filled with madcap situations straight out of comedies from the Silent Era with a corpse rolling down Mumbai's highways and time-bombs planted to kill the "good" blowing up in evil faces. The message is loud and clear: farce can fight a moral-political fascism.

Characters talk incessantly either about corruption or about being corrupt. We can see the downslide in the moral values in Indian politics and bureaucracy was already happening in a major way. Yes, Amitabh Bachchan had much reason to be angry. The Big B's anti-establishment film Andha Kanoon rubbed shoulders with Govind Nihalani's Ardh Satya during the same year that Kundan Shah's comedy of 'eras' made an impact.


Significantly this was also the year when the pre-Bachchan superstar Rajesh Khanna had his last spate of hits-Avtaar, Souten and Agar Tum Na Hote. Romance in cinema was dying. The angry brand of heroism was being favoured. Jaane Bhi Do Yaaron is also an angry film. But the wrath of the common man is here seen in a mirthful mood. Laugher is taken to be the best medicine to fight injustice.


The film's rightly celebrated climactic confusion on stage where the film's characters mingle with the characters from the Mahabharat to create a poetic panic and anarchy served well as a metaphor for the tangle that the country had created in its socio-political system months before Mrs. Gandhi was killed.