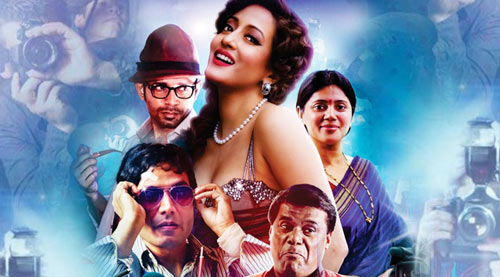 The Bollywood Fantasy. Mumbai the mecca of the make-believe lures hundreds every year to their near-inevitable doom. When was the last time we saw a film about the lure of Bollywood that draws aspirants like moths to flame?


Hrishikesh Mukherjee's Guddi? Meraj's under-rated Palkon Ki Chaon Mein? Count director K D Satyam's Bollywood Diaries, a film that comes to us without hype or hope, among the rare films that tell us what the Bollywood obsession can do its followers. The well-written 3-episode film features three Bollywood-fixated junkies so consumed and obsessed by the thought of seeing themselves on screen that they forget to live normal lives anymore.


The three protagonists are played with sturdily sensitively and splendidly by Ashish Vidyarthi, a government servant in Bhilai who at age 52 decides to fulfil his long-cherished Bollywood dream of becoming an actor, Raima Sen,a sex worker from Kolkata who dreams of being as effective on screen as she is bed, and debutant Salim Dewan as Rohit who-in the most difficult of the three roles-plays a ridiculous star aspirant who can't see how idiotic his Bollywood aspirations are.


Each of the three characters is so recognizable that I felt I knew them first-hand. Salim Dewan's deewangi is particularly disturbing as he struggles desperately to make his way into Bollywood through a talent contest, throwing all caution and dignity to the winds. It is not a pleasant sight to see the young man making a complete fool of himself in front of the judges or-in another notable scene of self-degradation-in front of a hotshot director and his cronies.


Hats off to debutant Salim Dewan for playing the ridiculous on-the-brink character with such heart-rending sincerity. The character Rohit's descent into delusional madness is so sharply etched as to leave us viewers jabbed for a long time.


Raima Sen's Imli the prostitute who is befriended by a 'serious' script writer (Vineet Kumar Singh) and then dumped is more as evocative as it is provocative. Seeing Raima Sen portray the character and her stoic response to infidelity with such heartbreaking fidelity, I wondered, not for the first time, why this beautiful actress still hovers uncertainly at the fringes of stardom. Her betrayal and its resigned acceptance are registered at opulent but subdued octaves, all through Raima's eyes. No hysterics. Just the calm after the storm.


But it's Ashish Vidyarthi who spent his entire youth hamming in third-rate villainous parts, who this time delivers a rousing utterly moving performance as Vishnu a man who wants to fulfil his Bollywood dreams only to be belatedly betrayed by mortality. This is the most complex segment to handle and protect from destruction. As Vishnu approaches death his belief that his Bollywood dream would be fulfilled in his next life, drags him-and the plot-into the realm of spiritual subversion.


A sequence where Vishnu, cringing with pain and anguish discusses with his wife (well played by the unknown Karuna Pandey) the various Bollywood families where he can be reborn, could have swiftly descended into absurdity. Director Satyam never lets the characters down. He nurtures them to their preordained annihilation, letting their destiny play with an inevitability that is at once moving and life-transforming.


The three segments are not segregated and yet never unified. Cameraman Dev Aggarwal shoots each protagonist's environment in suitable shades. Imli's brothel of benign prostitutes reminded me of Shakti Samanta's Amar Prem.


Director K D Satyam leaves the characters to shape out their own twisted destiny. Without getting over-wrought he punctuates his three protagonists' poignant predicament to the point where the audience is one with them. Strewn with songs that emit an unfinished brilliance Bollywood Diaries is a film that merits an audience. It is the kind of strongly scripted and persuasively enacted drama that needs to be applauded.


In Bollywood dreams die first. But such a rare film on the subject must not be allowed to die.