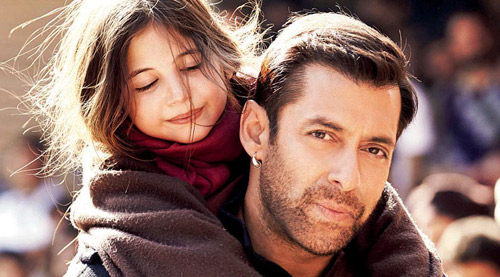 Sooraj Barjatya would be proud of Salman's Bajrangi Bhaijaan.


This Eid, Salman Khan has done something amazing .Salman has achieved a miracle beyond the blockbusters he churns out every Eid . This time in the very aptly titled Bajrangi Bhaijaan Salman has actually slipped into a character named Pavan Chaturvedi.


And he remains there. All through.


Rarely have we seen Salman stay in character throughout the film. The last time he played a character and not 'Salman Khan' was in Kabir Khan's Ek Tha Tiger .There he kept slipping in and out of character.


Not this time, buddy! Not in Bajrangi Bhaijaan. What we see on screen is an avatar of the innocent God-fearing upright and honest 'Prem' from Sooraj Barjatya's cinema, a Hanuman Bhakt whose self-righteousness would have been boring had it been played by any other star-actor.


We could say Salman plays the Son of Prem in Bajrangi Bhaijaan. And let's not waste any more time in sayingâ€¦ this is Salman's career's most accomplished performance to date, heartfelt passionate and emotional, as he takes charge of a little girl's travel plans back to her home in Pakistan.


Barbed fences and other man-made barriers crumble to the ground as our Hanuman-bhakt hero perches the cutest girl ever seen in cinema on his back and sets off to find her home.


It's an ingenious premise for a film plot, beautifully designed and executed and offering a panoramic view of the beauty that is India. Diretor Kabir Khan doesn't waste time in congratulating himself and his superstar hero for chancing on such an endearing plotline. There is very little concession to preening and posturing in this emotionally fluent story of an adventurous and exciting journey, a pilgrimage, to ensure little Munni, heartbreakingly vulnerable fortified from all extraneous threats by the baap of all super-heroes, gets home.


So what makes Salman character-driven this time? Is it the company he keeps? His co-actors Kareena Kapoor Khan in the first-half playing his persistent love-interest, and Nawazuddin Siddiqui in the second-half as a small-time morally confused journalist who helps Bajrangi find a way to get into Pakistan without going through the formalities. Both Kareena and Nawaz do their roles with lip-smacking relish.

But its little Harshaali Malhotra, with her lucid articulate eyes speaking more than words ever can, who steals the show. The little girl is a natural-born performer. Her rapport with Mr. Khan is so natural and real they soon begin to look like father and daughter on screen.


The parting of this twosome at the end will break your heart, as it is meant to.


Bajrangi Bhaijaan is all about heart. Its emotional quotient is so high and the storytelling so unassuming and transparent that the director's integrity becomes the touchstone by which we weigh the film's mellowly executed message on peace and amity across the border.


Some years ago for Eid Salman got together with Kareena Kapoor for that dreadful film Bodyguard. We forgive the pair their earlier faux pas. Bajrangi Bhaijaan will be recorded in the history of Indian cinema as a work that demolishes man-made borders without overt melodrama or aggressive rhetoric.


This is an all-out mass entertainer. But it doesn't need to shout to get attention. That's the beauty of watching Salman transform into the most secular hero of our times.


Salman isn't asking for our approval. He does what he thinks is right. He walks the lonely path. And when he reaches he destination we stand up and applaud. But we aren't sure whom we are applauding for. The leading man for getting so deeply involved with his character's conviction. Or the director for creating cinema that generates bonhomie positivity warmth and affection without straining for effect.