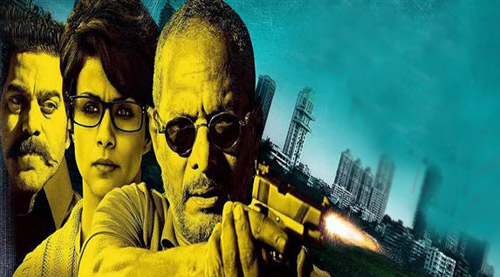 Get this. If the cop-and-gangster genre must continue to flourish in Hindi cinema, it must seek sustenance in the cliches.


That's what debutant director Aejaz Gulab does in the sequel to the highly-rated 2004 film. Taking the character of the 'encounter' specialist cop out of his (11 year?) retirement the narrative constructs a combustive plot about the nexus between politicians and criminals, and the conflict that arises when ideologies are squandered in greed and opportunism.


Admittedly all this has been done to death in earlier film. Yet, Ab Tak Chhappan 2 had me hooked. A lot of the film's spirit and energy flows from the central character. As played by the still-riveting Nana Patekar , Sadhu Agashe is a simmering relic of discontent ready to explode at any given moment. No wonder he has exiled himself in Goa from the scene of the crime.


The splendid steel-complexioned cinematography by Siddharth More captures Agashe and his son (Tanmay Jahagirdar) in a foamy filial harmony that never rings phoney.


In a sharp swerve away from the tranquility the narrative moves into the smothering crime scene in Mumbai without space for us to exhale. The encounters are brusque brutal and devastating. The director being an action specialist weaves the action into the drama and avoids all humbug. There are no songs punctuating the drama, not even in the background. And this must be the only cinema in the underworld in recent memory with no item song. Ah, bliss!


Barring a pungently punctilious background score by Sandeep Chowta which incorporates sounds and streams from the 2004 film, Ab Tak Chhappan 2 avoids trappings and adornments and goes straight for the kill.


The twists and turns may be predictable and you may occasionally wonder why the gangsters and their goons are all coffee-coloured of pigmentation. This film goes even further down the road to skin-tone stereotyping, Raj Zutzi playing a gang lord on a, even has a Black lady of African descent as his personal help.


But the film remains true to the rules of the gangster genre to the very blood-splattered end. It would be unjust to give away some of the twists and turns. But I must make mention of the space that the director makes for the emotional bond between Patekar and his son. The boy wants to be a full-time musician while the father gently suggests he should think of supplementing his 'passion' with a more practical vocation.


The father-son exchanges ring true. The writing, though self-conscious polemical and verbose, knows what it is talking about. Don't go by what you have read and heard so far. Ab Tak Chhappan 2 does ample justice to its characters. Nana Patekar is in top-cop form. His wry rage at the politics of corruption is eminently relatable. You feel the bitter resentment of this conscientious man who wants to cleanse what is nebulously noted in the narrative as 'the system'. His silent rage on losing the most precious person in his life and his hardhearted refusal to let an empathetic crime reporter (Gul Panag) remain a part of his life, are chunks from the plot that move you.


The supporting cast knows its job only too well. Stand-out performances come from Vikram Gokhale and Govind Namdeo. Ashutosh Rana, usually so out there, is surprisingly reined-in over here.


Ab Tak Chhappan 2 may lack the subtle cynicism and insinuated acrimony of Shimit Amin's original. It is nonetheless a gripping gaatha dunked in gore and violence about the blurred line between the law and lawlessness.

Preity Zinta remembers Sangharsh as it…