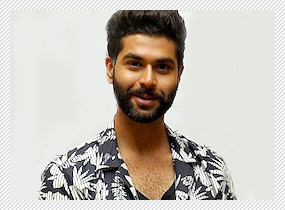 Having groomed actors like Abhay Deol, Akshay Kumar and John Abraham in the past, ace Designer Kunal Rawal made his way to style Shahid Kapoor in Rajkumar Santoshi's Phata Poster Nikhla Hero


We had a brief chat with Kunal on designing the look for Shahid's character Vishwas Rao in the film.


You have groomed actors like Abhay Deol, Akshay Kumar and John Abraham earlier, what was the brief given to you for Phata Poster Nikhla Hero?
The brief given to me was that Phata Poster Nikhla Hero is about a normal Mumbai guy, who wants to be an actor but is mistaken for a super cop. Even though he is in his cop suit in most of the scenes, he still reveals his quirky side in the songs and also through his bright blue aviators.


When you got the brief of Shahid's character, what interested you to take up this film?

Since the story and characters of Phata Poster Nikhla Hero seemed so real, because a lot of people out there who aspire to be actors, I was interested in the movie.


You have styled Shahid in the past. How different was it creating his look this time?
Just like all movies always differ from each other so do different characters. Shahid in Teri Meri Kahaani had three sets of looks, so the styling was different for all three parts. This time, his character was of a normal guy who is mistaken to be a cop. So even in his cop suit, to show his love for acting, he wears popping blue aviators.

What was your inspiration for creating Vishwas Rao's look in the movie?
Being a Mumbai guy, I had a lot of friends who were struggling to be actors earlier, just like Shahid's character in the movie and they would roam around in bright silhouettes. So I guess that was my inspiration.


What research went in while styling the character?
There was not much research done on the paper, since the story, like I said before, resembles reality and there was more research done with real people.


What according to you is Shahid's character's style statement?
Even though Vishwas (Shahid) is seen in a cop suit in most of the scenes, he wears blue aviators to add a pop of color to his uniform and to show that he's a normal guy who wants to be a hero. So I think they are his style statements.


Where did you shop for the movie?
All his clothes were shopped for in Mumbai.


What color palette did you use for Shahid's character?
I've used a color palette of toned bright peppy colors, Shahid's pants are colorful and his shirts have bold prints. We've used a lot of color-blocking for his look.


Which fabrics did you make use of?
Keeping in mind Shahid's realistic character, I have used more of cotton, which is reasonable, which normal guys can afford and usually wear.

Since Shahid is seen donning a police vardi in most of the movie scenes, did it take a little less effort to design this time?
Even though the changes were less, the efforts were not. We had a lot of changes in the songs where Shahid goes out from his police character.


Apart from quirky prints and color blocking which other trends did you make use of?

The other two trends we've used are bright popping colors and bold prints.


Which look of Shahid would you pick as your favorite from the movie?
There is no single look as such, but Shahid's look from 'Dhating Naach' is one of my favorites.


How was it working with Shahid Kapoor once again in Phata Poster Nikhla hero?

It was fun. I enjoyed a lot. I've already worked with Shahid before in Teri Meri Kahaani and styled Ileana in her Tamil movie so seeing her on the sets and working with Shahid again felt good. The story is such that you enjoy so much while watching the actor do the scenes. I hope you guys enjoy it too.