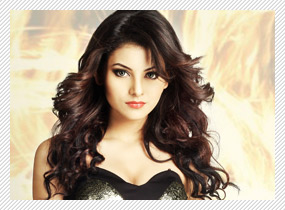 Close to two and a half decades back years back, it was Sridevi who had managed to win everybody's heart with 'Mere Haathon Mein Nau Nau Choodiyan Hai' in Chandni (1989). Circa 2013 and it is going to be newbie Urvashi Rautela's turn to do something similar on the big screen. She has stepped into a celebration song with a similar situation in Singh Saab The Great.

"The song is titled 'Jab Mehdni Lag Jaawe' and it is for a 'mehendi' setting. It is an elaborate number with some expansive choreography by Chinni Prakash and Rekha Chinni Prakash," informs our source, "For 19 year old Urvashi, it was a huge task indeed since for her very first film, the mandate was loud and clear. She had to step into Sridevi's shoes and make sure that her very first celebration number in Bollywood counted."

On her part, it was good news for the beauty queen as well since instead of making her presence felt through a quintessential item number, she was getting an opportunity to step into an Indian attire and perform on dance steps that were totally 'desi' and aimed at the family audience.

"Yes indeed," agrees Urvashi, "What is all the more fabulous about 'Jab Mehdni Lag Jaawe' is that it is exactly similar to Sridevi madam's 'Mere Haathon Mein Nau Nau Choodiyaan Hai'. She had done an amazing song there and while it would be a sacrilege to even claim that I came anywhere close to her performance, the fact remains that I tried and did what I could do best. My director Anil Sharma gave me a huge set up for this song which lends it so much grandeur. For my very first film, it is a fabulous beginning indeed."

What further makes the song fabulous is Sunny Deol entering the scene as well and performing in the number.

Chuckles Urvashi, "Well, you have to see that to know more. I guess Sunnyji is an amazing dancer when he comes on his own. In this song too you would see some really 'heavy steps' indeed from him."

Well, as long as the steps remind of 'Yaara O Yaara' from Jeet, it is going to be fun indeed.