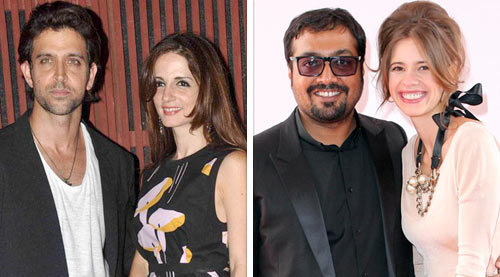 2014 saw more separation in the Indian entertainment industry than relationships. Is this a sign of the intolerant times that we live in? Looking at the top celebrity break-ups of this year.

1. Hrithik-Sussanne end fairytale marriage: How could they? There are shock waves running through the industry even now... The complex causes for this painful separation are not in public domain. While Susanne has conducted herself with great dignity, the talks of various women in Hrithik's life seems a little unbecoming.

2. Sickening split: Displaying disgusting marketing savvy, TV actor Karan Singh Grover announced the end of his marriage to the very dignified actress Jennifer Winget a day before the launch of the trailer of his debut movie.

3. We're not telling: Harman Baweja and Bipasha Basu are no longer a couple. But they refuse to talk of their split. Better to not get into the details when the picture is not even clear to the people involved.

4. Pooja Bhatt says goodbye to marriage: Pooja chose a very dignified public statement on the death of her 11-year marriage. No bitterness, no hidden agenda. You listening, Mr Grover?

7. Chitrangda bids golfer-husband goodbye: Finally after months of hide and seek, Chirangda split with her golfer husband Jyoti Randhawa. For what? We don't know. We don't see her career going anywhere.

8. Priyadarshan's wife bids goodbye: After months of speculation, one-time actress Lissy finally called it a day with prolific filmmaker Priyadarshan. It seems business interests had entered their bedroom. Moral of the story: never let your wife know the size of what you carry in your pants. The wallet, I mean.