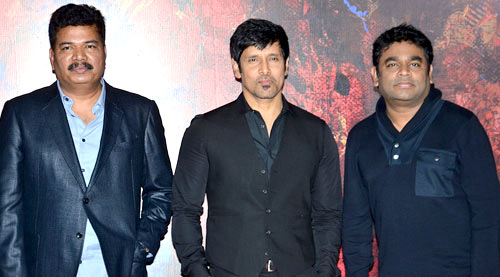 With an astounding 5 million views on Youtube, a special preview of Shankar's highly anticipated and ambitious film 'I' was exhibited at PVR Cinemas in Juhu Mumbai yesterday. The press conference was attended by the principal crew of the film, director Shankar was accompanied by cinematographer P.C Sreeman, art director T. Muthuraj, choreographer Bosco and the lead actor of the film Vikram.

In place of the aforesaid 30 minute preview, the trailer and three of the film's songs 'Pookele', 'Ennodu Nee Irunthaal' and 'Mersalayiten' was screened to the sporadic gaggle of journalist sitting with rapt attention in the red decked cinema hall. The crew helmed the stage to answer questions on the making and overall experience of the film thereafter.


When asked about conceiving the music for the film, A.R Rahman revealed an interesting facet that Shankar had mentioned about the film 15 years ago. Reiterating the revelation, Shankar says, "This was an idea conceived fifteen years ago which was as small as a scratch! And I had scribbled it into a small piece of paper." Shankar also revealed that the film evolved through time and was shot over a span of three years.


The cinematographer P.C Sreeman divulged a beguiling fact, that 'I' would inevitably be the last Indian movie to be shot on celluloid - making history he said, "It took over a 100 years for the evolution of film, while only 10 years for the digital cameras to occupy its place. I would need to adapt to these new times and stay ahead of the game with everyone else."


One of the music videos had an almost beauty and the beast theme to it where Vikram wore intense prosthetic makeup to play the part of the repugnant beast, which was made possible by Weta Workshop to achieve the look. Weta Workshop, a New Zealand based company, is one of the leading Hollywood prosthetic makeup companies which has contributed to the Lord of the Rings films, District 9, The Chronicles of Narnia and the latest Mad Max film which is to release next year.


Talking about getting into the character's skin, Vikram said, "I had to compete with many bodybuilders in the film which took about 3 years for me to get close to looking like one, whereas it took over 3 to 5 hours to put on the makeup and about one and a half hours to take it off as well. I play three roles out of which two of them required a lot of prosthetic make up."


Director Shankar ensured the best crew was roped in to make the film possible, the visual effects of the film was done by Rising Sun Pictures from Australia, with Srinivas Mohan being the head VFX supervisor of the film. The costume department crew had also worked on the costumes for Men in Black and was also a part of 'I' which took a long time to nurture. The ambitious Rs. 100 crore film is set to release next month on January 9, 2015, and given the international crew with the time involved in making 'I' happen, let's hope the film makes an impact at the box-office to equalize the efforts of the makers as well.