The trailer of the nationalistic film Shershaah was launched on July 26 which is commemorated every year as the Kargil Vijay Diwas. Kargil Vijay Diwas is celebrated to mark the contributions made by the Indian soldiers during the Kargil War of 1999. An event was organised at the National Horse Polo Ground in Drass to pay homage to all the soldiers and launch the film's trailer. The event had the presence of Bipin Rawat, Chief of Defence Staff General, Y K Joshi, General Northern Army Commander Lieutenant and a few other Army corps. 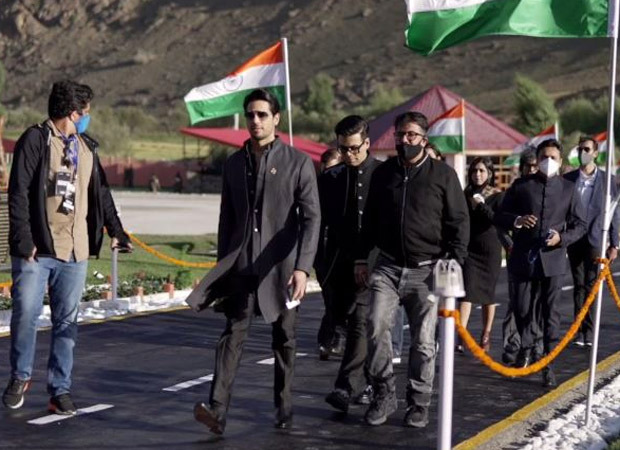 The trailer launch had the presence of the film's actors Sidharth Malhotra, Kiara Advani, producers Karan Johar and Shabbir Boxwalla and director Vishnu Varadhan. While media professionals from various reputed media houses were also invited for the launch of the promo.

Karan Johar thanked the Indian Army for inviting them to such an important and big event. He talked about it and said, "Shershaah is not just a film for us at Dharma Productions; it is a feeling, an emotion. We are honoured and privileged to be able to tell this story on screen." He also said that it is not just a story but a homage on behalf of the entire nation. Meanwhile, Sidharth Malhotra who plays the titular role of Captain Vikram Batra expressed that it is a very emotional day for him as he has been working on this film for more than 5 years.

After the star cast expressed their gratitude to everyone, the trailer was screened in the presence of Indian Army jawans. The trailer showed Sidharth Malhotra in double roles as Captain Vikram Bhatt and his identical twin brother Vishal Batra. In the end, the trailer was applauded by all.

Shershaah is an upcoming biographical war film directed by Vishnu Vardhan which will trace the life journey of Param Vir Chakra awardee and army captain Vikram Batra. Apart from Sidharth Malhotra in the titular role, it will also have Kiara Advani essaying the role of Dimple Cheema. The film will be released across 200+ countries in various languages on August 12.