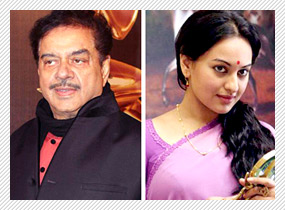 The hard-as-nails Shatrughan Sinha, known to reduce many of his leading ladies including Rekha to tears with his savage wit and wicked barbs, broke down and wept when he saw his daughter's performance in Lootera.

Speaking affectionately and with controlled parental pride, the man who generally calls a spade a spade, is uncharacteristically restrained when it comes to praising his own flesh and blood.

"When Sonakshi did Son Of Sardaar she looked every inch a Sardarni. In Lootera, she looks completely Bengali. I don't want people to say, 'Apni beti ke baarey mein shuroo ho gaye.' But the fact is I've faced the camera for 45 years, and I know when I see an extraordinary performance. I couldn't see my daughter Sonakshi in Lootera. I only saw this ill suffering girl called Pakhi on screen. And my heart melted."

So realistic is Sonakshi's performance as a girl in the 1950s dying of tuberculosis that the doting father spontaneously dialed his daughter during the screening to ask, 'Beta, sab theek toh hai?'

Laughs Shatrughan Sinha in ill-concealed embarrassment. "Ab kya Karen? Ek baap toh baap hi hota hai. The way Sonakshi has portrayed the bronchial cough is amazing. It was so realistic that I got scared. My girl has never been exposed to the harsh realities of life. Where did she get to know about such pain suffering, hurt and humiliation?"

Shatruji says he cringed when he saw Sonakshi's character Pakhi pleading with Ranveer's character to visit her.

"Rejection is a terrible humiliation. I never realized how much damage it can do to a girl's self-esteem until I saw Sonakshi's performance in that sequence where Pakhi begs with the man she loves to visit her the next day, or the day after or the day after that...My heart reached out to the character. When a girl faces such crippling rejection, she can do anything. That scene made me realize how callous and careless men can be, and how careful they need to be when dealing with a woman's heart."

The proud protective father says, watching his daughter in Lootera has changed his perception of a woman's emotions. "I can safely say Sonakshi is the more talented actor between the two of us. When I was her age I could barely understand deep emotions, let alone portray them. And here she is putting across such dark complex emotions so effortlessly. Full credit to director Vikramaditya Motwane for getting this performance out of my daughter. I can confidently say Lootera has taken her to another level."

It can now be revealed that the Sinhas now intend to speed up the process of reviving the family banner Ramayan Chitra with a film starring Sonakshi Sinha and her brother Luv Sinha.

No, it won't be a brother-sister story.