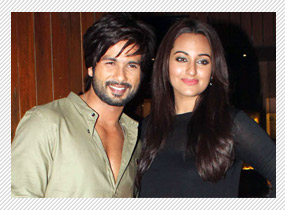 Now this is what one calls as 'taking a joke on one's own self' and being cool about it. This is what Shahid Kapoor and Sonakshi Sinha went through while shooting for Sunil Lulla and Viki Rajani's R... Rajkumar. Even though many actors would have possibly thrown a fit on the joke being brought on screen, neither Shahid nor Sonakshi were fussy around that and readily agreed to mouth the dialogues that came their way.

"One of the scenes in the film requires Sonakshi and Shahid to pull each other's leg on their height and weight respectively. The makers were not sure how the actors would react to this. However, to their pleasant surprise, both actors had a hearty laugh around it and enacted their part with complete conviction," informs a source.

The only trouble that actually happened was on the sets when the actors as well as crew were totally in splits when the scene was required to be canned, hence resulting in number of retakes.

"The scene begins with Sonakshi commenting upon Shahid's height to be quite low in comparison to hers. Not to be taken down, Shahid too retorts with an innocent face about Sonakshi's weight and how he is 'adjusting' to that without 'complaining'," an insider adds, "Considering the fact that heroes are very touchy about their height and any talk around weight in front of heroines is a taboo, it has been quite sport on the part of both the actors to be merrily playing along."

However, the move has worked as the new theatrical promo of the film features this scene, hence promising many more laughs in this action romantic affair.

No wonder, both Shahid and Sonakshi are elated. Says Sonakshi, "Oh yes, we were in total splits and were constantly laughing. Neither one of us had any qualms around doing the scene. A lot of people were not expecting our pairing to work, but the response has been fabulous."

She goes on to add, "As a matter of fact, someone told me after seeing this promo that a scene like this only reinforces the fact that we are so imperfectly perfect together!"

Now it couldn't have been better stated!