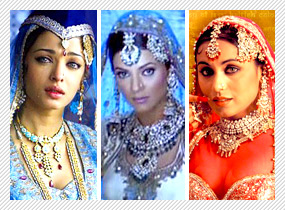 The big day is all set to arrive for Kangna Ranaut. She is making her debut as a

nautch girl with Rajjo today. Stepping into a role that not many mainstream Bollywood

heroines have played before, the obvious comparisons for her are being made with the likes of

other than these iconic actresses, there have been few others as well who have tried to step in

Here is presenting 10 such actresses from past and present.

Aishwarya Rai - Umrao Jaan (2006)
It was sacrilege no less for someone to actually attempt remaking Rekha's Umrao Jaan.

However J.P. Dutta got adventurous and tried doing that with Aishwarya Rai. The only output of

this was her coming close to Abhishek Bachchan, the film's lead, and beginning of a steady

affair. Yes, she did well, but the burden of expectations was so high that right from the

release of the music, it was downhill for the film.

Sushmita Sen - Kisna (2005)
A year before Aishwarya Rai, another beauty queen who had tried getting into the garb of a

'tawaif' was Sushmita Sen. This was the beginning of a downhill journey that Subhash Ghai was

extended special appearance, there were no takers for this confused affair starring Vivek

Rani Mukerji - Mangal Pandey (2005)
In the same year as Sushmita Sen, even Rani Mukerji had attempted doing something different in

the Aamir Khan starrer Mangal Pandey. As a 19th century courtesan, she did exude oomph

film that went on many tangents and couldn't really settle down to the core of the story.

19th century, she moved on to the fantastical world created by Sanjay Leela Bhansali in

Saawariya. She did well in her teasing act as she took on a boy (Ranbir Kapoor) under her

wings. She danced well to the tune of 'Chail Chabeela' and carried herself well but when

it came to the film as a whole, audience said 'I Don't Likes'!

most iconic shoots by Raj Kapoor, she did well as a 'dukhiyaari bechaari' while weeping away in

Rati Agnihotri. The film had incidentally released in the same year as Ram Teri Ganga

Maili but instead of relying on titillation, director B.R. Chopra chose to address a social

issue with much drama and seriousness. Though it was Rishi Kapoor who was the most notable star

in the film, it was Rati Agnihotri who led from the front.

Salma Agha - Pati, Patni aur Tawaif (1990)
This lesser known act and the film may not have quite made it to the list but then it deserves

to, courtesy the twisted storyline that it carries. Mithun is married to Farah but when Salma

Agha, a 'tawaif' comes in his life and gets pregnant, he has to make a choice. Reason? Ms. Agha

would allow that or rather leave his wife.

as Tabu decided to bring some dialogue-baazi to good use as a 'kothewaali'. Her confrontation

scenes with Ashish Vidyarthi, who played a cop in the film, are still remembered for their

applause worthy impact in theatres. As for the mandatory 'mujra', she did it with aplomb in the

Mahie Gill - Gulaal (2009)
Mahie Gill too had a 'mujra' to her credit in Gulaal though the song in question,

'Ranaji', could well be termed as a fusion number, courtesy references to Bisleri,

this K.K. Menon starrer where Anurag Kashyap was in good form. Unfortunately, the film didn't

cover much distance commercially and Mahie's act isn't remembered much.

Helen, Queen of the Nautch Girls (1973)
However, the true homage that has ever been paid to nautch girls in Bollywood featured none

other than (and most deservingly) Helen. For a woman who has featured in over 500 films and done

all sorts of dances, many being 'mujra' and cabaret, it was just apt that Merchant-Ivory came up

with an Anthony Korner documentary on her tremendous work. The movie is a montage of scenes from

her films and very interestingly, features an opening sequence from Shashi Kapoor starrer

Bombay Talkie where she danced alongside him on the keys of a 'giant red typewriter'.