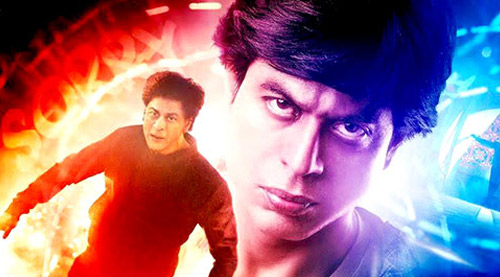 After the abysmal Dilwale, it looks like Shah Rukh Khan is all set to resurrect the actor within himself. Director Maneesh Sharma's Fan which opens on April 15

will see Shah Rukh as never before, or shall we say, as seldom before.


So far the teasers of this eagerly awaited film have shown Shah Rukh and his doppelganger-fan in a teasing pleasing almost flirtatious relationship.


But the first full-length trailer released on the last day of February (leap year...Shah Rukh leaps into the year, get it?) reveals- yes , it is no less than an apocalyptic revelation-an actor, a

superstar, at the pinnacle of his skills as he plays himself, the superstar with a different name (King Khan has assumed the playful alias of Aryan Khanna, Aryan being Shah Rukh's son's name, and

Khanna as in Rajesh Khanna the greatest superstar India has ever known) and his fan the wimpy whiny Gaurav.

intensifying the inflexions) where Gaurav asks his idol for just five minutes of his precious time.


"Can't you give five minutes to your biggest fan?" Gaurav pleads. "It's my time. I can do what I want with it," retorts Aryan firmly.


No, this is not a simple snub. I've seen how stars are besieged by fans, almost as if they, the fans, have a birthright and ownership over their idol. I was with Akshay Kumar once when he was

attacked (there is no other word for it) by a persistent fan. It took all of Akshay's persuasive powers, then some more, to get rid of the fan.


Shah Rukh Khan in Fan creates two completely different personas on screen, the superstar and the fan. After the superstar ticks off the fan, the trailer becomes a dark thriller with the fan

creating havoc in the superstar's life.


The inspiration is no doubt Shah Rukh's character in Yash Chopra's Darr. But Fan looks a lot more tense edgy and exciting. It is also a very relevant film in today's times when the

relationship between stars and fans has become far more casual and informal because of the constant exposure that stars get on television.

Romance has created a cinema that provides Shah Rukh Khan a platform to be reborn as an actor.