Sara Ali Khan is out and about in the city promoting her upcoming film Atrangi Re. The first song from the film titled 'Chaka Chak' sees Sara dancing to the catchy song voiced by Shreya Ghoshal. Recently, Sara performed to the song with none other than the graceful, Madhuri Dixit. 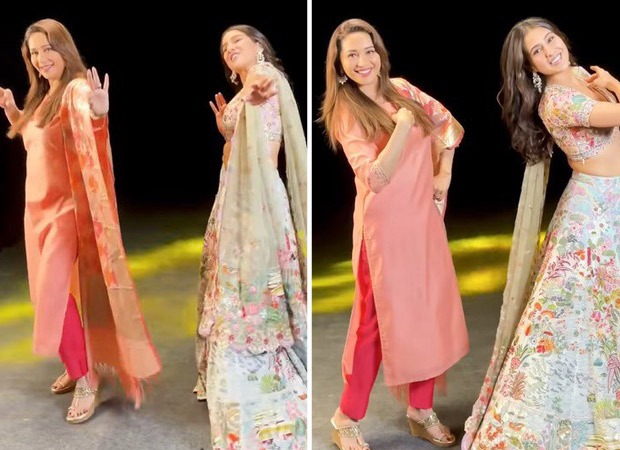 Taking to her social media, Sara shared a video of her doing the hook step of her superhit track with the legendary actress and dancer, Madhuri Dixit but with a small twist. The 2 not only did the hook choreography of Chakachak but also added the iconic step from Madhuri's 'Chane ke khet mein'.

Earlier Sara had also performed to the song along with actress Ananya Panday on the stage of Lokmat Awards 2021. Sharing the video, Sara wrote, "Chakachak girls
Thumka and Twirls
Dearest AP quickly learns
And Rinku’s love and gratitude she immediately earns".

The young actress will be seen carrying the role of Rinku, who was titled as the heart of the 'atrangi' love story by the director, Aanand L Rai for their upcoming film, Atrangi Re. The film also stars Akshay Kumar and Dhanush.

ALSO READ: EXCLUSIVE: Sara Ali Khan opens up on the challenges she faced while filming ‘Chaka Chak’ in Atrangi Re