Actress Sara Ali Khan has always been good to the paparazzi and her fans. She is one of the most humble celebrities in Bollywood who often greet Paparazzi with her signature trademark ‘namaste’ and ‘adaab’. On Monday, at the launch of Atrangi Re song “Chaka Chak”, the paparazzi and her security team had a minor tussle. Being the classy nawab she is, Sara took it upon herself to apologize, but not before pulling up her guard. 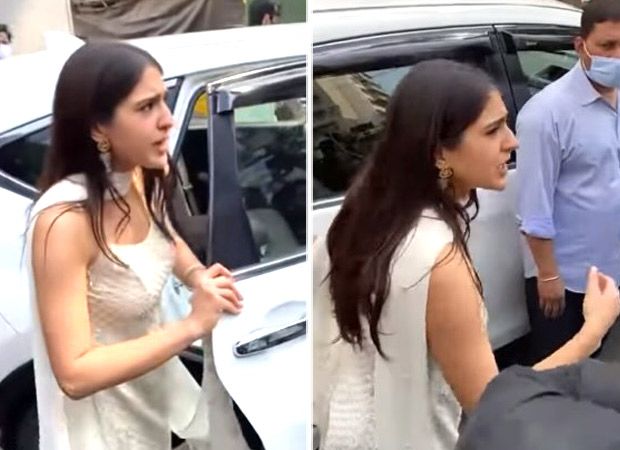 In a video that’s now gone viral, Sara is seen on her way to her car from the event. She stops in front of the paps, and asks, “Woh giraya kisko aapne (Whom did you push down)?” As everyone around tells her, “Koi nahi gira (no one fell down), the actor shoots back, “Nahi nahi, jisko giraya woh chale gaye (No no, the one who was pushed has left already).”

The Simba movie stars then tells the photographers with a remorseful tone, “Sorry bolna please. Thank you.” Before stepping inside the car, she tells the guard beside her, “Aap nahi kijiye aise. Dhakka mat dijiye, koi baat nahi (Don’t act like this. Don’t push anyone, it’s okay).” Sara adds, “Thank you Thank you. I am sorry,” before driving off in her car.

Sara Ali Khan starrer Atrangi Re  released its first song ‘Chaka Chak’. In the upbeat number, Sara can be seen grooving to the beats, dressed in neon green and pink saree. The song, also featuring Dhanush, is set in a South Indian style celebration event. The song has been sung by Shreya Ghoshal and composed, arranged and produced by A R Rahman.

As for the film, Atrangi Re stars Akshay Kumar and Dhanush next to Sara Ali Khan.