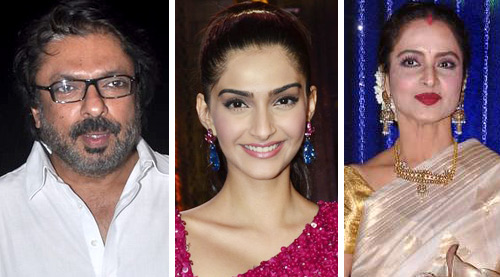 Hrishikesh Mukherjee had written Khoobsurat especially for Rekha whom he affectionately called Chinnapunu which means 'Little Daughter' in Tamil.


Now would Anil Kapoor's Chinnapunu be able to deliver in the iconic role?


Sanjay Leela Bhansali who introduced Sonam in Saawariya seems to think so.


Says the filmmaker, "I see a tremendous growth in Sonam. There're a lot of positive vibes surrounding Khoobsurat. The songs are nice and she's dancing with confidence. I can see my discovery is enjoying what she's doing."


Trade analyst Komal Nahata thinks there's no need to compare Sonam's interpretation of the Khoobsurat fire-cracker with the one Rekha played 34 years ago.


Says Nahata, "I don't think Sonam needs to be compared. It's perfectly fine if she is good in her own right. Sonam doesn't need to surpass Rekha to make her mark. And in any case surpassing Rekha is a tall order. Why burden Sonam with that? If she goes beyond what Rekha did...great! But even if she doesn't, it would just be fine if Sonam lived the role in her own way."


Komal reminds us that the film is not a frame-by-frame remake. "So I think comparing the two is not required."


Film critic Raja Sen is looking forward to seeing what Sonam has done in Khoobsurat. "Rekha is certainly an icon. But frankly, she was never among the finest of actresses. Much applause for the eyes and the kohl. But performance-wise for a career that long, there are very few genuine triumphs. More than Rekha, Khoobsurat was made iconic by Hrishida. And he's a tough act to follow up."


Raja feels the remake wears a bright inviting look. 'The shiny-happy-Disney mood of the remake makes the new Khoobsurat look like it is targeted at a totally different audience. And that may finally prove a smart move. Looking forward to Khoobsurat because what Shashanka Ghosh has done with it should be fun."