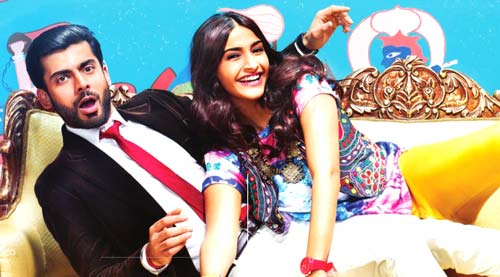 1. It is a remake of one of Hrishikesh Mukherjee's personal favourites: As Hrishida had told me before his death, Rekha was always his favourite actress and he wanted to do a film that revolved around her character. Khoobsurat was made especially for Hrishida's favourite actress.

4. Rekha transforms into Kirron Kher: To update Hrishida's Khoobsurat which was made 24 years ago, Sonam plays the daughter of the character Rekha played in the original Khoobsurat. Rekha's character is played by Kirron Kher.

5. Ratna Pathak plays her mom: Dina Pathak had played the stern matriarch in Hrishida's Khoobsurat who cannot bear to see her house rules broken by a chit of a girl who storms into her family. That role has been taken over by Dina Pathak's daughter Ratna in the remake.

6. Royal High(ness): While Hrishida's Khoobsurat was set in a upper middleclass business family, the remake is situated in a royal family of Rajasthan. Pakistan's Fawad Khan was chosen to play the family heir because no leading man in Bollywood seemed right for the part.

7. Stage coach: The Khoobsurat remake marks the Bollywood debut of the theatre actor and acting guru Aamir Raza Husain. He plays the role of the docile in the matriarchal family originally played by Ashok Kumar.

8. Sonam's not influenced by Rekha: Sonam has moved as far away from Rekha's original rendition as possible. For one she plays a physio-therapist, a form of medical treatment that didn't exist when Hrishida's Khoobsurat came along in 1980. Also, Sonam desisted from singing in her own voice because Rekha has done so in the original.

9. Anand ban gaye Khoobsurat: If the secret be told Hrishikesh Mukherjee had taken the protagonist's character in Anand and turned it into Manju in Khoobsurat. Sonam in the Khoobsurat is actually an amiable amalgamation of all the get-happy characters in Hrishida's films Anand, Mili, Bawarchi and Khoobsurat.

10. Ghosh of a chance: Why was the director of the sambhar-western Quick Gun Murugan Shashanka Ghosh chosen to direct producer Rhea Kapoor's remake of Khoobsurat? Because they wanted someone irreverent who wouldn't be awed by the original. Got that?