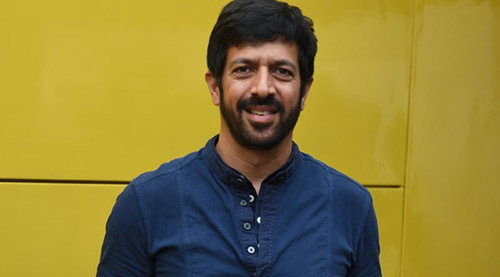 Bajrangi Bhaijaan is still doing well and bringing in moolah. The film has close to Rs. 320 crore in its kitty and is an All Time Blockbuster. Now six weeks after its release, Kabir Khan is bringing another film - Phantom. No, he isn't aiming for such high numbers for this action-thriller of his. In fact even if the film garners 20% of these numbers, he would feel content. Reason? The film's genre, stage and setting is different while the budget has been accordingly controlled as well. With the Sajid Nadiadwala production exploring a new territory for this Saif Ali Khan-Katrina Kaif starrer, Kabir knows what is expected out of him.

First and foremost, congratulations on the All Time Blockbuster success of Bajrangi Bhaijaan. Cliched as it may sound but were you expecting this big a success?

(Laughs) Honestly, nobody could expect the kind of business that the film is currently doing. The moment your film becomes one of the highest grossers ever, you wish for more. But no, honestly I didn't expect the film to be this huge. See, Bajrangi Bhaijaan was an alternate film for Salman Khan. It wasn't made as a big action thriller and could have gone anywhere. There are lots of examples where some really good films are made but then they don't manage to cover much distance. That was the case with Swades. It is one of my all-time favorite films but couldn't get the kind of commercial success that it deserved.

Now that Phantom is up for release, you must indeed be hoping for a good commercial success in the making.

Of course you want your film to be seen by the maximum number of people. You want it to reach out to as many as possible, especially the ones who want to find a meaning in the current affairs, and that too in a manner that none it seems frivolous on screen. Why go far back in time? Just look at the recent spate of attacks in Punjab and Jammu. Who is doing that? Why is that happening? All of this eventually makes you remember the tragedy of 26/11. Our country is constantly engaging with terror and when you have 26/11 as a backdrop, lot of people would identify with the theme of Phantom.

The film also brings you back in the zone of realistic action entertainers after New York, right?

It is a counter terrorism thriller and is definitely in the area that I like to dabble in. My source material was S. Hussain Zaidi's book Mumbai Avengers. The core material there itself was so interesting. See, sometimes in films and books you can do stuff that you cannot in real life. We do speak about it on social media and read about it in the newspapers. Phantom talks about why can't we stand up to terrorism in a certain way and find a solution? Why are we attacked incessantly? Perhaps in real life there are political or security reasons for that, and hence a balance has to be maintained. In films though, you can explore!

The genre, stage and setting that Phantom belongs to; it has a certain offbeat feel to it, a la Haider where a serious issue (of militancy) was explored. Even your Bajrangi Bhaijaan wasn't a quintessential Salman Khan film. Guess the audience has opened up too to different kind of subjects?

Yes, it is quite important that audience is receptive to newer ideas, stories and narration. I am glad that my producers and actors have shown conviction in the films that I want to make. Whether it was Salman or now Saif and Sajid, they have been thoroughly on board from Day One. You know, one of the biggest problems in the industry is that the more successful a star or a producer becomes, the safer he plays. However, it is commendable when he takes a risk, gets into a different mould and steps into an unexplored territory. Now that opens up doors for a filmmaker to make different kind of films. Salman, Saif and Sajid have helped me make that possible.

From the 'desi' ambience of Bajrangi Bhaijaan, you get back into international space though with Phantom.

Yes, Bajrangi Bhaijaan was my first film to be totally shot in India. However whether it was Kabul Express, New York and Ek Tha Tiger or now Phantom, my scripts have needed an international political backdrop. Moreover, Sajid too has an eye for making his films visually very appealing. His production team ensured that we got the best of locations and an excellent crew at disposal.

Moreover you have actors like Saif Ali Khan and Katrina Kaif at your disposal. As performers, how have the two turned out to be?

I am really happy with the way they have approached their characters. Since both these characters are very different from the ones that we see in mainstream cinemas, it was good to see the manner in which Saif and Katrina played them. There is certain maturity that was required and both of them showed that in ample. There is also certain interpersonal dynamics required between the two. They had to bring in a different kind of warmth on screen. Phantom doesn't feature a usual love story between a couple.