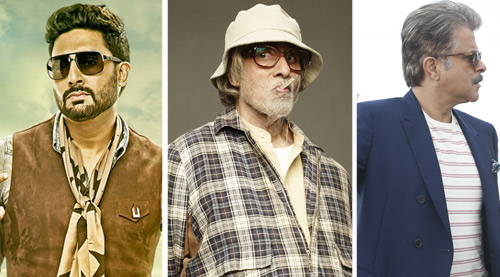 While the paisa-spending public needs variety in their packages of entertainment so that they can make the producers laugh all the way to their banks, in 2015, it's been a slightly different ball-game.

Most films endorsed by the all-important audience have been "family entertainers" in diverse senses, as they have been stories revolving around family values, yet in different ways. The latest in the list is All Is Well, which is a modern-day take on the mythological ideal son Shravan from the Ramayan. This film with a message has Abhishek Bachchan evolving into the idealistic Shravan after being a selfish young man.

A 'familial' approach has been quite endemic this year, and what is enlightening is the difference aspects of family that these diverse movies have covered.

Dum Laga Ke Haisha, set in the '90s, was about a marriage arranged for an uneducated cassette shop owner (Ayushmann Khurrana) that turns out to be a nightmare when he finds that his wife (Bhumi Pednekar) is grossly obese. Highlighting the virtues of commitment in matrimony and yet underscoring the importance of education, the film showed how progress and old-world values could meet in a wholesome blend.

In Piku, Amitabh Bachchan played the constipated old widower who is quite a curmudgeon, even to his educated and marriageable daughter Piku (Deepika Padukone), who in turn is a very eccentric Bengali architect. The old man, a confirmed hypochondriac with rigid views on everything from diabetes to sexuality, and Piku, end up playing havoc with each other's peace of mind and with that of a hapless taxi fleet owner (Irrfan Khan) who gets unwittingly entangled in their lives.

In Tanu Weds Manu Returns, the effect of a broken relationship between spouses on their respective families is depicted with sympathy as well as humour when Tanu (Kangna Ranaut) and Manu (R. Madhavan) decide to split. Add the angle of the self-willed Haryanvi lass Kusum, Tanu's lookalike who Manu falls for, and her quirky family, and we have a crazy dekko into the best and worst of Haryanvi and Uttar Pradesh culture. There were also sharp but subtle comments on gender equality and change in orthodox society.

Dil Dhadakne Do, though technically a film that could not make a profit, did make good numbers and was liked by most of the audiences. A couple in a now-loveless marriage (Anil Kapoor and Shifaali Shah) heading a dysfunctional family decides to celebrate their silver wedding with a lavish overseas cruise for "close friends" (read mostly business associates who can anchor the failing family business!).

The daughter (Priyanka Chopra) wants out from her chauvinistic husband (Rahul Bose) while the son (Ranveer Singh) is a bit of a rebel. And then there's the family dog Pluto who "narrates" the tale with his own "mature" perspective!

Bahubali - The Beginning was your classic saga of a royal family, complete with evil relatives, the rightful heir (Prabhas), conspiracies, the good woman in the bad clan (Ramya Krishnan), the troubled mother (Anushka Shetty)waiting for her missing son who is the actual heir to the empire, and loyal staff. The first dubbed Hindi film to make 100 crore, it was a visual and technical spectacle that essentially told a simple story of good winning over evil.

Bajrangi Bhaijaan looked at a family on the other side of the border, a peasant couple that had got separated from their handicapped six year-old daughter (when mother and daughter had come to India) and is completely traumatized as she cannot speak or write. Back home, Bajrangi (Salman Khan) takes the onus of reuniting her with her unknown parents, against all odds.

Drishyam-the remake of a Malayalam hit-demonstrated how even a simple, video library owner (Ajay Devgn) who was a "fourth standard fail" could become wily enough to thwart a whole army of ruthless cops when his daughter (Ishita Dutta)'s and wife (Shriya Saran)'s future is threatened. Taking ideas from the films he distributes and also keenly watches, he always remains that crucial one step ahead of the law.

Pitted against him is a ruthless cop (Tabu), who is also the hapless mother of a missing son who is the cause of the hero's family's woes, and her helpless husband-signifying yet another family in which the parents will do anything for their offspring.

And finally, Brothers, an Indianized remake of the Hollywood drama The Warrior, looks at warring stepbrothers (Akshay Kumar and Sidharth Malhotra) fuelled by hatred that was once nothing but unconditional love. The man at fault is actually their common alcoholic father (Jackie Shroff), who now stays with the younger son and has killed his wife in a moment of drunken angst. All three men are trained fighters and how their issues are sorted out during a single bout in the boxing ring between the brothers was depicted in a somewhat lengthy manner.

Of course, there was a second parallel story of the older brother, a physics teacher doubling up as a fighter to make money for his seven year-old daughter's kidney transplant.

The family has always been the paramount institution in Indian society. Family dramas have been a distinct genre and every aspect of a joint and later nuclear families has been explored through stories that encompassed satire (Teen Bahuraniyan), comedy (Tere Ghar Ke Saamne), filmi melodrama (Jeene Ki Raah), intense love (Kabhi Khushi Kabhie Gham... ), hilarious comedy (All The Best, Golmaal Returns), larger-than-life love (Dilwale Dulhania Le Jayenge, Hum Aapke Hain Koun!...) and more. But while we would get these hit family affairs off and on almost every year, in 2015 they have come in a bit of an overdrive.

It's all about loving your family!