Salman Khan, who is known to launch new faces in the industry, yet again is bringing two new talents who will mark their debuts with Notebook. The leading lady of the film Pranutan Bahl is the granddaughter of the veteran actress Nutan and the daughter of Mohnish Bahl. While Zaheer Iqbal is also a friend's son, he does not have a filmy background. The trailer was launched on Friday where Salman Khan revealed that he helps to launch candidates and not anybody else. 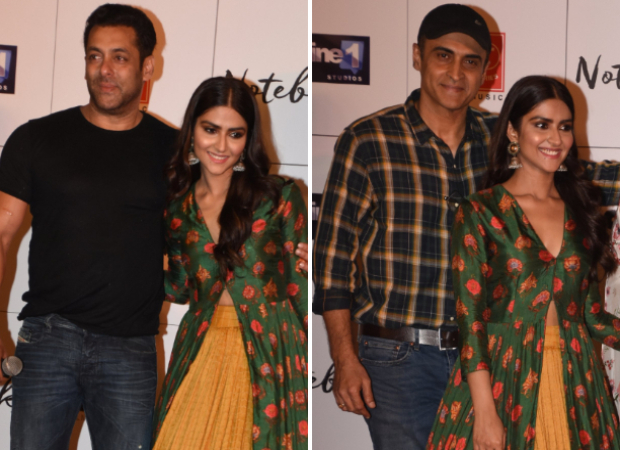 "Not help, I launch deserving candidates, not anybody," he said. “I know Zaheer from the time he was not even conceived. I still owe his father Rs 2011. Now, he (Zaheer) will repay for me. For the last five years, he has worked very hard. He has trained with me, and he was the assistant (director) on Jai Ho. If I don’t like something he does, I make him do it over and over again,” Salman Khan said at Notebook trailer launch on Friday.

While talking about Mohnish Bahl’s daughter Pranutan Behl, Salman Khan said, “I remember Mohnish working three shifts when I was struggling. I used to model and assist a bit and work out in the gym. As I was underage, he used to pay for me. The manager of that gym didn’t have much respect for me. I don’t think he even does now. He would make sure I am not in the gym. So whenever he was not there, Mohnish would help me sneak in and pay for me too. One day, I was working out, Mohnish comes and tells me how he is tired of working round the clock. He had completed a schedule in Hyderabad, and then in Mumbai. He said that it was too tiring for him and that he wishes that God gives him a break. Next week, his film Teri Baahon Mein released. God did listen to him, and gave him the longest break of his life (laughs). Then I got a film called Maine Pyar Kiya. The first person to sign me, Raj Babu (Raj Kumar Barjatya) passed away yesterday. God bless his soul. So I went and met Raj Babu. They signed me for the film. It had a negative lead. So I suggested to him that he should try Mohnish Bahl. Raj Babu was apprehensive to offer Mohnish a negative role as he was Nutanji’s son. I then went to Nutanji’s residence Sagar Sangeet in Cuff Parade (south Mumbai), and she convinced Raj Babu that Mohnish could do it.”

Mohnish Bahl was also in attendance for his daughter's debut trailer launch. A happy father was ecstatic to have Salman Khan by her side. He said, “Athiya and Sooraj are not the first people he gave a break in Bollywood. I was the first one. And after giving me that break, see where his career went.”

The trailer of Notebook presents an interesting love story writing new notes in the book of Bollywood as it marks the debut of Zaheer Iqbal and Pranutan Bahl. The unusual love story continues the trend of content-driven films that are winning over the hearts of the audience. Directed by national award-winning filmmaker Nitin Kakkar, Notebook takes the audience on a romantic journey back in time against the backdrop of Kashmir, raising the question, can you fall in love with someone you never met?