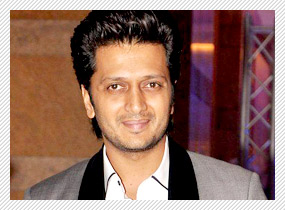 He has been a consistent feature of each and every Sajid Khan film, be it Heyy Babyy, Housefull, Housefull 2 and even Himmatwala (where he had a cameo). However when it comes to Humshakals, where he would be seen yet again, and this time in a triple role, Riteish Deshmukh is happy to acknowledge Saif Ali Khan as the freshness factor in the film.

By the look of things, Humshakals is a mad world created by Sajid. Apparently, you along with Saif are also possessed by a dog in the film, due to which you run around the streets. Did it ever get embarrassing?

(Smiles) Well, it isn't just this single scene; there are a lot of others too where we may have got embarrassed had we become conscious about that. But you are just doing your job after all. Then there is Sajid who always carries so much of conviction that you just go with the flow. Moreover, Saif and Ram (Kapoor) were in there as well amidst all the mayhem, so it wasn't embarrassing at all.

You and Saif have traditionally followed different methods of comedy right through your career. How do you complement each other in Humshakals?

Yes, we have an entirely different approach. In fact for Saif, Humshakals is probably one of its kind commercial massy flicks. Otherwise when it comes to comedies, you usually find him in light hearted affairs like Dil Chahta Hai or Hum Tum. He approaches a character there in a much subtle manner. It is different in case of Humshakals though where he has absolutely played to the gallery. This is the reason why I truly believe that Saif is freshness of Humshakals.

While you are crediting Saif here, the fact remains that between Housefull and Grand Masti, you have scored a double hat-trick with six successes in a row. That's too good to be true, isn't it? After all, you must be looking at extending the innings with Humshakals and Ek Villain.

Oh yes, it is too good to be true for sure. People have been kind and God has been great. As for my coming films, I don't want to think too far away. We are still pitching and promoting the two films. I think we will talk about it once we know what happens. Having said that, the vibes are of course good so you do feel that in the air.

Still, you aren't heard blowing trumpets around your continued success? Have you specially instructed your PR team to keep it low?

Well, to each his own. See, once a film is successful; you have to concentrate on the newer ones that are in your hand. Now that I am talking to you about Humshakals, why would anyone want to say, hear or write about Grand Masti doing 100 crore last year? You just move on to your next!