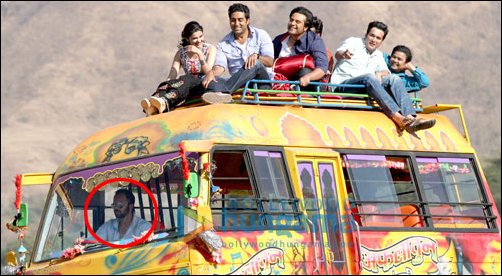 Director Rohit Shetty whose name is synonymous with action packed masala blockbusters is back again with yet another comic caper Bol Bachchan.

Shetty is known as a perfectionist and ensures that each shot of the action sequences which include cars and buses are perfectly executed. In fact, on several occasions in his previous movies, one has seen the director himself driving the vehicles which include stunts with the actors such as Kareena Kapoor's entry shot in Golmaal 3 where she's standing on the bonnet of a red sports car.

This time around too in Bol Bachchan, the director will be seen driving a bus which has Abhishek Bachchan, Prachi Desai and Krushna along with many actors seated on the roof. Says a source from his unit, "Rohit always showcases some larger-than-life and high power sequences but at the same time ensures that the stunts are performed keeping in mind the actor's comfort level and also the safety of the unit. Whenever he feels that the stunt is even slightly dangerous, he takes charge."

So if you see this daredevil director seated in the car or bus that's doing some mean stunts, don't be surprised.