Zoya Akhtar directorial Gully Boy starring Ranveer Singh and Alia Bhatt released last month. The film, inspired by the lives of rappers Divine and Naezy, revolved around a boy trying to make his dream of becoming a rapper come true. Ranveer performed all of his rap songs while winning the audience's heart as Murad. Meanwhile, Alia Bhatt won hearts with her performance of the feisty and strong Safeena. As the talks about the sequel are on, fans are demanding more of hip hop culture. 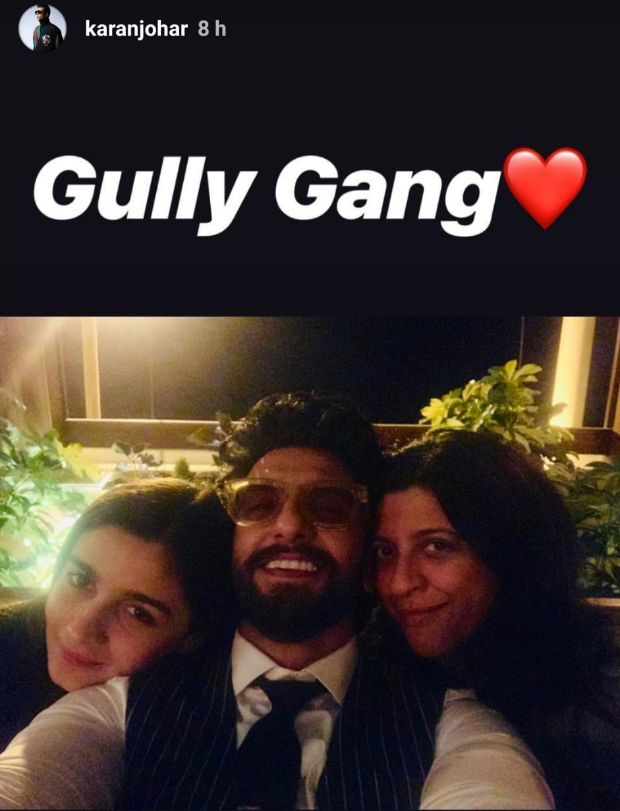 Just a day ago, the reunion of Ranveer Singh, Alia Bhatt, and Zoya Akhtar made everyone happy. Karan Johar shared a photo of the actors and the directing reuniting since the film's success and simply captioned it, "Gully Gang." Both Alia and Zoya are seen leaning on Ranveer's shoulder as they pose for the selfie.

Zoya Akhtar has indeed confirmed an expansion of the Gully Boy in the future. Speaking on the sequel, Zoya said, “My co-writer Reema Kagti and I do feel there’s so much more to be said on the entire hip-hop culture in our country. And yes, another film exploring the theme is being scripted and planned.”

Meanwhile, Ranveer Singh has begun prep for his next film '83 in which he will essay the role of former Indian Cricket Team Captain, Kapil Dev. Directed by Kabir Khan, the film will revolve around the 1983 World Cup Win. Alia Bhatt, on the other hand, will soon begin promotions for Kalank which stars an ensemble cast. Post that, she has several projects including Brahmastra, Arunima Sinha biopic and Takht.