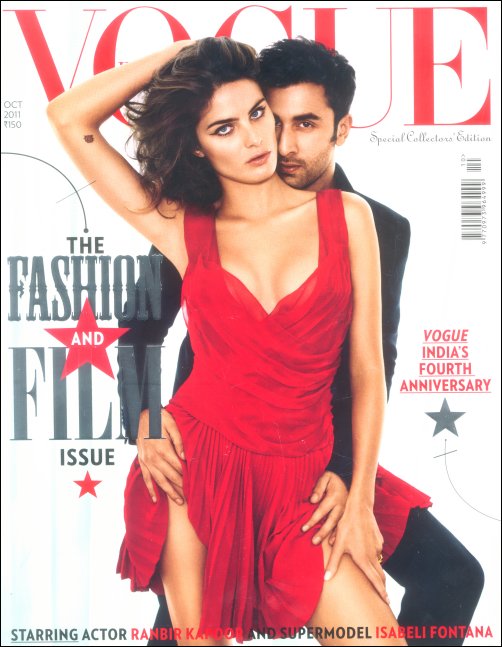 To start with, Ranbir 'CLEARS' the eternal question by saying that 'NO... I am not a womanizer. It's a perception that the media has created, because the pages needed to be filled. I have stopped caring. I am 28 years old and extremely heterosexual!" Talking about brand and fashion, he confesses, "I don't understand fashion, I don't understand brands. I have had some education on it through my mother and sister, but mostly, it's instinctive. I think that a woman looks best in a white shirt and jeans. She has to be wearing a personality with it." When asked about his so called much talked about alleged affair with Nargis Fakhri (his co star in Rockstar), he says "I work in a visual medium. And yes, the people with whom I work with are very good looking. I still believe in monogamy- at least physically. Emotionally, chances are one may stray. But it's not fair to the one you are with if you can't be faithful. I'd rather not be in a relationship-at the moment I am not. I am not looking for love right now. But it's not like I am this horny rabbit, either!"

And this one's for all the girls who wanted to know what this dude does in his free time. Well, get the answer straight from the horse's mouth. He says, "I play with my PS3. Or I will be watching movies. I am a night owl. I feel like life is passing by me when I sleep early. So, I stay up late, then, I wake up late, laze around, vegetate basically, I don't really party any more, I exhausted that when I was studying in New York."

To know more about such confessions, check out the Vogue that features the Gen Next Superstar Ranbir Kapoor with the international model Isabelli Fontana (we were sure you would have killed us if we did not reveal her name)!