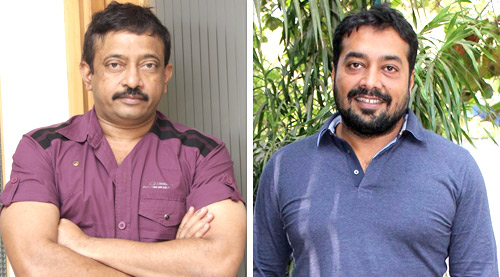 Earlier we had reported about the way Ram Gopal Varma was slamming Anurag Kashyap's recently released Bombay Velvet. However, now the constant one sided bashing of the

film has taken a new twist considering Anurag Kashyap too has taken to Twitter to respond to RGV's comments.


Anurag Kashyap, who was once Ram Gopal Varma's assistant, has been having a tongue-in-cheek banter with the latter on Twitter. RGV's last comment on Bombay Velvet read, "A director standing

by his film rejected by the audience is like him telling a girl "I love myself and I don't care if you don't love me". In response to the same, Anurag said, "@RGVzoomin sir i love you too much..

now put that Vodka aside and sleep.. lots of kisses."


From there on continued a series of tweets which read, as follows:


Ram Gopal Varma: @anuragkashyap72 well sir for ur info I stopped drinking ...I am not into kissing men but love you too


Anurag Kashyap: @RGVzoomin then lets have filter coffee together soon to celebrate the AAG..

Ram Gopal Varma: @anuragkashyap72 Sir u very well know that I luv u more than u luv me and I suggest that we both have coffee with Karanâ€¦

Ram Gopal Varma: @anuragkashyap72 And in the course of having Coffee with Karan maybe we can learn from him how not to make Aag's and make Kuch Kuch's


Bombay Velvet has registered one of the lowest box office collections in Ranbir Kapoor's career and has even received several negative reviews from the public and critics alike.

Big brands like Parle and Bajaj to not air…