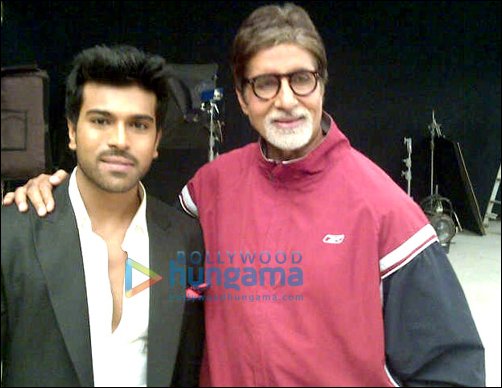 By now its common knowledge that Telugu star Ram Charan Teja will be playing the iconic role of Inspector Vijay in the Zanjeer remake. The remake directed by Apoorva Lakhia also stars Priyanka Chopra, Arjun Rampal and Prakash Raj in pivotal roles.

When the team of Zanjeer remake was shooting at Film City recently, they were happy to know that Amitabh Bachchan too was shooting next door for an ad. Apoorva Lakhia, who is a family friend of the Bachchans, immediately took his hero Ram Charan to meet Big B and take his blessings.

In his blog, Big B mentioned, "While on set I learnt that 'Zanzeer' the II was being shot on an adjoining floor and that Charan the hero and its maker Apoorva Lakhia wanted to visit me. Charan is a very successful star in his own right in Telugu cinema, he is the son of superstar Chiranjeevi, a dear friend. I met them and wished them well. The producer is Prakash Mehra's son Amit, named after me during my long association with Prakash ji during and after Zanzeer."

Giving his views on the remake, Bachchan added, "The rights belong to Mehra and they have the right to make or remake what they like. I cannot have a say in it. I worked as an artist in the film and got my remuneration for it. Over! Seeking my opinion would be incorrect. Whatever I say shall be developed into a huge media story and nothing else. What matters at the end would be what the film possessed in quality and intent and content. That is it. For this I can only give my very best wishes. I do hope they will make a successful film, and who knows 20 years from now they may want to remake another make of it. So where does that leave your reaction to this now!! Be content with the fact that it is a compliment to the film being remade - it was worthy of remaking when you had a hand in making the original. How many films do carry the benefit of a remake is what needs to be appreciated also."