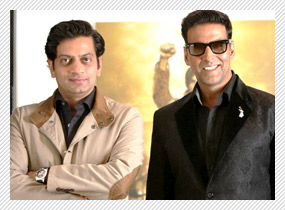 How do you style God? Ask Raghavendra Rathore who designed for Akshay Kumar's character of a modern Lord Krishna in the recent OMG Oh My God!


If you are a fussy moviegoer who frets about your cinema hall seat too much, and whether the popcorn is buttery enough or the Coke chilled, even as a film has begun to roll, it is likely you will miss the credits that Akshay Kumar's costumes in Umesh Shukla's recent film OMG Oh My God! were by Raghavendra Rathore. But as soon as Kumar - who plays Krishna Vasudev Yadav - makes his entry, his deep blue flowing jacket with gold buttons, worn with Jodhpurs and a white shirt alerts you to the sharp RR signature.


"It was like a call from heaven," says Rathore with a loud laugh. Given that he had never met Kumar in person, when Rathore received a call from the actor to design his clothes for the film, he was surprised. "I went to Mumbai to meet him personally, to understand the pace of the script and get a sense of the story," says the designer. Since the film was produced by Kumar's own company, the actor took personal interest in the project, giving the designer a clear brief.


Rathore spent the initial months only researching the idea of God through clothes, also how God had been dressed in Western films with similar themes. He realized that the colour white (remember the white jackets in Bruce Almighty? ) seemed omnipresent. But Kumar's character in OMG Oh My God! has metaphysical nuances. There are references to Christ, Paigambar and Sai Baba, and while Kumar plays Krishna, charioteer, mentor, friend and philosopher, who shows the way but not the destination; he also possesses a religious universality representing multiple religions. "So the clothes or accessories couldn't be simplistic," says Rathore. The designer admits that he got over-involved in visualising the hair, makeup and overall look only to realize later that Kumar wanted it stylish but not disconnected. Besides, the actor didn't want the designer to worry about his hair and makeup at all but focus only on clothes. "It was a journey from dreamy imagination to a practical pinning down of the idea of God at work. My designs went through many transformations. Once I knew that there was a special motorcycle that Kumar would ride in the film, I figured that the garments needed to be practically appropriate," he says. Numerous visualisations, ideating from the point of extraordinary experiences to create Kumar's clothes that in the film are a mix of the classic, the formal, the stately to a casual but soft cowl-necked pristine white shirt, were sketched out initially. Later they were produced in the factories where Rathore manufactures uniforms for various companies. "We sent them many options and they paid separately for each look they picked," he adds, explaining that a number of accessories like the peacock brooch and keychain - symbolizing the sudarshan chakra - were tweaked with good graphics.


So if you want a God-like buttoned jacket with a luxurious, red inner lining with smart breeches for your Facebook profile, you know who to call. Hidden discount: Spring-Summer or Autumn-Winter, you can wear it forever, as God is likely to remain in fashion.