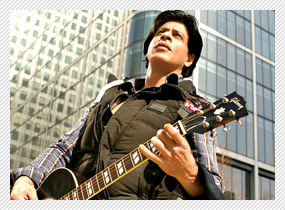 The countdown has begun for one of the most anticipated films of the year- Jab Tak Hai Jaan. The advance bookings have already started on a positive note and fans of Shah Rukh Khan and Yash Chopra can't wait to watch them re-Â­create magic on screen all over again. A couple of days back we brought you Part 1 of SRK's interview in which the actor spoke about a variety of things right from playing an Army officer to returning to the romantic genre again. In Part 2 of this interview with Bollywood Hungama's Nikhil Ramsubramaniam, King Khan sheds light on his experience romancing two gorgeous beauties, his take on the numbers' game, his most cherished memory of late Yash Chopra and also gives his take on the infamous controversy doing the rounds relating to the high profile Diwali clash between Jab Tak Hai Jaan and Son of Sardaar. You don't wanna miss reading this one...

You are paired opposite two beautiful women- Katrina Kaif (for the first time) and Anushka Sharma (for the second time). How's been the experience romancing such beautiful women?

I keep thanking and praising my co-stars Katrina and Anushka because they bring in something so amazingly different to the table that it becomes easier for me to react to their acting. I actually requested them many times to do their scene first so that I can take a cue and react differently. Having said that, both of them have been wonderful. With all due respect, I really love all the women I work with. I've loved all the heroines I've worked with till date and thankfully none of their boyfriends have beaten me for saying that. I've said this for years and at times my comments have been misconstrued in a cheap manner by news channels. But I would still say it.

Do you think the definition of love and romance has changed over the years?

Not really...it's just that I am just getting into smaller places and stranger places like telephone booths and rooftops now that I have exhausted all the conventional locations to romance my heroine (smiles). Jokes apart, it's very heartening to know that love is always the same... only the way of expressing it changes. We all have a different expression of love. The definition of love hasn't changed. As a matter of fact, love cannot be defined.

These days a lot of importance is being given to numbers, and movies strive to enter the coveted 100 crore club. You however don't seem to be too caught up with the numbers game. Why so?

I've never given numbers importance. I don't believe in numbers. I genuinely abhor numbers. Even if it's business I don't believe in discussing numbers with public. I get angry when even my own producers sometimes put up these ads stating 'Film has crossed 100 crores etc.' I remember when Om Shanti Om had become a huge hit, Farah came up to me and spoke about putting up an ad mentioning the actual B.O. collections. I told her, â€œJust write it's the biggest hit in the history of mankind but don't write the number and confine the film and it's reach.â€ Earlier people used to only talk of numbers post-release now it's strange the people are talking about numbers even pre-release (smiles).

Are you upset with the way the clash between Jab Tak Hai Jaan and Son of Sardaar has taken an ugly turn post Ajay Devgn Ffilms legal notice to YRF?

Rather than being upset I'd say it's just silly. It's just not right. As a person who knows economics, I'd say it's a free market. We are offering our goods to everyone and its upto the buyers to decide whether they want to buy or not. It's not a controlled market nor is it a monopolistic market. It's not even a restrained competitive market. It's a purely competitive and free market. The consumer is the king, and the exhibitor represents the consumer. If they wish to screen our films or not screen our films at their theatre it's entirely their prerogative. We can't force it down their throats. The consumer cannot be forced to watch a film. I don't know how this gets resolved. What are we trying to show by doing all this? I don't understand the logic and emotion of all this. If you are worried that you have less number of screens you should have booked it earlier. Because your business house hasn't done it and the other business house has done it, why are you holding that against us? We decided to come on Diwali more than one year ago. I am not belittling anybody's film. I am hope their film also does well. I find it very strange rather than disheartened. Now it's best that we pray and hope inshallah that both films do well. I am sure Yashji would have also wished the same.

Finally you have worked with the legendary Yash Chopra in many of his films. What is the one thing said by him that you will always cherish forever?

I remember after Darr, Yashji said to me, "Insaan Ki Asli Achchai Tab Maloom Padti Hai Jab Woh Apne Ghar Par Nahin Hota" which means, at home we all are good; how we conduct ourselves outside our home turf determines our true goodness. I had injured my shoulder very badly during the shooting of Darr and had managed to somehow complete the film despite the injury. That time Yashji told me, "Even with all your problems you completed the film. You are a total team player. You like things to go right. I cherish you for the fact that outside your house you are a wonderful guy. You never complain about the room, the car, the costumes, the location etc." He said this to me on the last day of Darr. I was a newcomer then and he had worked with the biggest of actors by then yet for him to say this about me, meant a lot and is something that I will cherish forever.