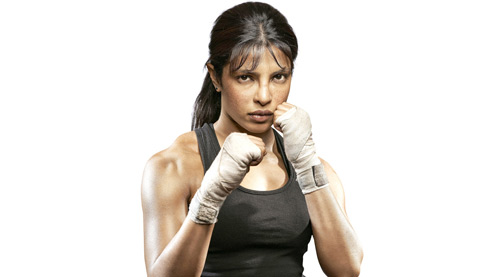 Omang Kumar's Mary Kom which opens this Friday is expected to be yet another film where the leading lady plays the hero. We've had many of those this year, notably Vikas Bahl's Queen, Sai Kabir's Revolver Rani, Samar Shaikh's Bobby Jasoos, Soumik Sen's Gulab Gang, and most recently Pradeep Sarkar's Mardaani where Rani Mukerji took centre stage.


Priyanka Chopra is no stranger to playing the hero. She has played the main protagonist in author-backed roles in Madhur Bhandarkar's Fashion, Ashutosh Gowariker's What's Your Raashwe? and Vishal Bhardwaj's Saat Khoon Maaf.


Mary Kom is being seen in the film trade as a very special film that could catapult Priyanka Chopra to the next level in her career. She plays an iconic sportswoman and one who is very much a part of our contemporary collective consciousness. Just how definitively Priyanka captures the essence of Mary Kom's personality would depend on many factors including the quality of the script and the director Omung Kumar's command over the character and the narration.


Ajit Andhare, COO Viacom, the co-producers of Mary Kom, says, "Priyanka is perhaps the only actress today who can on the one hand, play the glamorous heroine with ease next to a male lead in a 100-crore film and at the same time pull off a female lead film with powerful portrayal entirely on her own. This is evident in Mary Kom."


Says director Omung Kumar confidently, "Priyanka is a star who has got what it takes to pull off a role like Mary Kom. She is a dedicated and hard-working actor and that attitude is reflected in her work. This film required an actor who forgot about her star-power and just became Mary Kom in all aspects. Priyanka did exactly that."


Omung says he couldn't have cast better. "Priyanka is a total package. With the kind of performance and sincerity that she has extended into her role I couldn't have asked for a better Mary Kom."


He declines a guess on whether Mary Kom would equal the records of Bhaag Milkha Bhaag. "I only wish people would like the film and appreciate the hard work everyone has put in."

Director Kunal Kohli who directed Priyanka in Teri Meri Kahaani feels Priyanka is an outlier. "She has proven it from the start of her career through the career choices she has made. She has done things no other actress could have done, not only because they didn't have the balls to do it but because they couldn't even think of doing what she did."


Kunal wishes the best for Priyanka. "As wonderful as PC is an actress, she's even more wonderful as human being. For her I'll always wish the same."


As for becoming as big as Bhaag Milkha Bhaag, Kunal retorts, "Mary Kom will definitely create a huge impact on its own, so let's not compare it to anything else."


Adds Subhash Ghai, "Priyanka loves to surprise us each time by playing characters that are much more than decorative dolls. I am sure Mary Kom would be no exception."


Hansal Mehta says he is equally gung-ho about Priyanka's performing abilities in Mary Kom. "I know one thing for sure. A great story never fails. Priyanka is a phenomenally committed actor and I hope Mary Kom is Priyanka's Bhaag Milkha Bhaag."


Prasoon Joshi who wrote Bhaag Milkha Bhaag says, "I haven't seen Mary Kom yet. So it would be unfair of me to comment. But I am sure Priyanka has given a great performance. While writing Bhaag Milkha Bhaag (BMG) I felt that we needed to develop more stories in this genre. And I'd be very happy if audiences give Mary Kom the same welcome they gave BMG."


Producer and author and media commentator Pritish Nandy feels Mary Kom lacks the novelty value. "BMG was a surprise. But now audiences are expecting film biographies to hit the screen. In that sense Mary Kom is a reprise. But I am sure Priyanka will make it outstanding. Priyanka is a very gifted actor and will certainly make Mary Kom into sparkling inspiring film."


Suneel Darshan who launched Priyanka into the big league with Andaz feels Mary Kom would be a turning point for the actress, "The 12-year old journey of PC's career has been embellished with box office successes and glittering performances in Fashion, Barfi, etc. Mary Kom promises another sterling performance from Priyanka."


Concludes Ajit Andhare, "Mary Kom has been given a 'U' censor certificate which means audiences of all ages can watch it. It's tax-free in Maharashtra from the day of release and has a clear corridor besides being a terrific film. If ever there was ever a heroine-centric film with a good shot at a 100-crore club, here it is."