Priyanka Chopra is a global star today having tasted success in Bollywood as well as in Hollywood. And like most major stars, she also had her share of controversies. For the first time, she reveals what she went through during three such episodes in her life during which she was trolled and which altered her relationship with social media, probably forever. 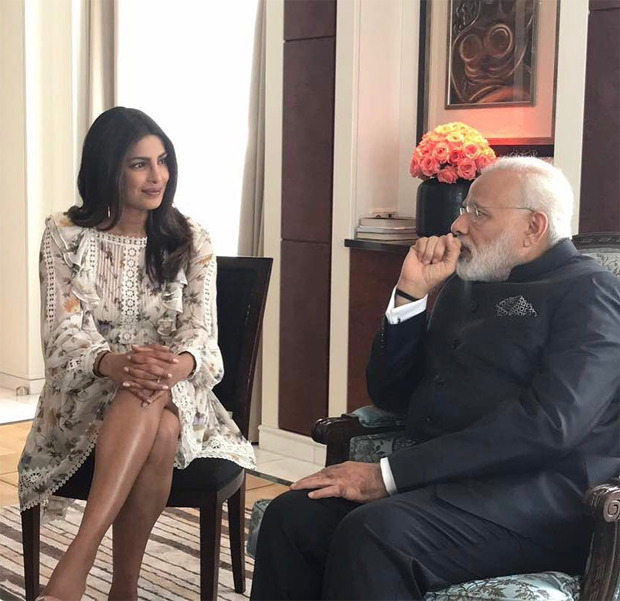 NARENDRA MODI MEET CONTROVERSY
Priyanka Chopra played the baddie in the 2017 film Baywatch. Since she had an important role, she was a part of all the promotional events of the film. One day she was doing the promotions in Berlin when she realized that Indian Prime Minister Narendra Modi was also in the same city, to meet German Chancellor Angela Merkel. Moreover, she and Modi both were residing in the same hotel. She contacted his office to request an audience with him. The permission was granted and she met Narendra Modi for a few minutes during which their pictures were clicked together. She says that since she met him in the middle of Baywatch promotions, she was in a dress, and not in a saree. She also says that the dress was knee-length, high-necked and long-sleeved.

Yet, when the pictures came out, it led to a lot of brouhaha. She was criticized for meeting the prime minister with her legs exposed. Moreover, some pointed out that since her legs were crossed in some of the photos, her posture seemed arrogant and therefore inappropriate for meeting with a head of a state. “It was one of the first times I became global news and I swear that was not the way I wanted to make global news,” remarks Priyanka.

The same night, Priyanka Chopra posted a picture with her mother, Madhu Chopra, in which both were wearing shorts and sitting cross-legged. The caption she sent with the photo was, ‘It runs in the family’. She then adds, “I felt that I had presented myself respectfully. I had worn skirts and dresses all my life in India, at school and elsewhere, and I didn’t understand why it was now considered so unacceptable. The whole uproar baffled and saddened me.”

#ARMPITGATE:
A year before this incident, Priyanka Chopra’s hot Maxim India cover led to major controversy. In the picture, one of her hands was above her hand with her armpit exposed. Maxim India was accused of photoshopping her armpit, “specifically, smoothening and whitening it.” It became a trending topic on social media and #ArmpitGate trended on Twitter too. Priyanka confesses, “I was at Paris Fashion Week while all this was happening. My team and I were mortified, appalled and hysterically laughing all at the same time because we couldn’t get over how ridiculous and surreal it was to have my armpit go viral. Did this mean I’d finally made it?”

Yet again, Priyanka diffused the situation by posting a picture of her exposed armpits and the caption this time was, ‘#WillTheRealArmpitPleaseStandUp’.

QUANTICO HINDU TERRORIST ROW:
Priyanka Chopra's big breakthrough in the West was thanks to her TV show ‘Quantico’. It was a runaway success, prompting the ABC Channel to greenlight multiple seasons. In Season 3, ‘The Blood Of Romeo’ episode showed a Hindu extremist group trying to blow up Manhattan with the intention to pin the blame on Pakistan. It led to a huge outcry in India and Priyanka was

slammed for agreeing to be a part of it. Priyanka felt this was unfair as “I wasn’t a writer or a producer, and I didn’t have any control or input into the storyline. Not to mention the fact that we’d have villains of every ethnicity trying to blow up New York over the course of the show.”

Priyanka Chopra says that the uproar didn’t die down quickly and went on for a long time. When she returned to India, police had to provide her security as she had got threats and also because her effigies were burned outside her house. ABC Studios had no choice but to put up an apology. Sometime later, Priyanka Chopra too apologized for hurting sentiments. However, even this led to condemnation. “Damned if you, damned if you don’t,” she says and adds that the whole incident was deeply disturbing.

Priyanka Chopra then mentions that over time, her relationship with social media has changed. When these websites came into being, she was one of the first celebs to jump on the bandwagon. She said she enjoyed directly talking to the fans and found pleasure in having interactive sessions. However, she says that this relationship turned into mistrust and fear. “Once I felt that it was unsafe to show myself in all my vulnerable humanity, I pulled back. It was instinctive.”

She continues, “Cancel culture and social media shaming have, in many ways, stopped me from having the meaningful conversations I used to have, with followers.” These episodes made her engage with controversy as little as possible. She also wishes if there was an ‘infallible guidebook’ which can inform her on how to keep different people and cultures calm not just in India and USA, but all around the world and on social media as well. She ends the chapter by hoping that the world should work to find ways to be curious and kind.