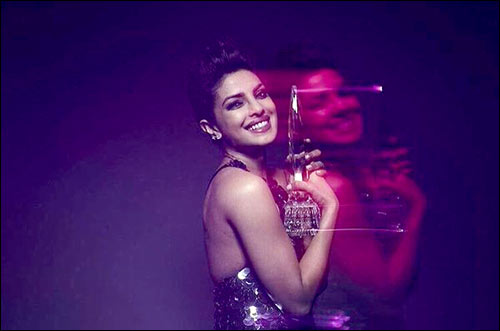 From becoming an international pop star to turning singer at NFL (National Football League), Priyanka Chopra had established her name and fame across the world with her immense talents. And now, the actress has decided to take it further by starring in a show titled 'Quantico' as the protagonist. Not only has the series been gaining popularity, but the actress also bagged an award for the same.

Priyanka Chopra was recently presented with the 'People's Choice Award' for 'Favourite Actress In A New TV Series' at the ceremony held at Los Angeles, California on January 6. Thrilled with the honour, Priyanka Chopra not only posted a picture of her with the trophy on her Twitter handle but also expressed her happiness saying, "I am so fortunate!Thank U to everyone who voted for me at the #PCAs! My #PCManiacs-I am nothing without you!Big love". Priyanka attended the ceremony in style, donning a two toned metallic outfit by Vera Wang and matching metallic pumps.

Priyanka Chopra was competing with the likes of Emma Roberts, Jamie Lee Curtis, Lea Michele, Marcia Gay Harden for the award. Amongst the winners like Johnny Depp, Sandra Bullock, Chris Hemsworth, Priyanka Chopra is said to be the first South Asian woman to have won the People's Choice Awards.