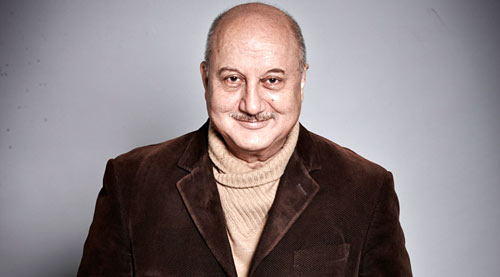 We all know that the extremely versatile performer Anupam Kher is one of the few people who have been a part of some of the best films coming from Rajshri Productions. This

week sees the release of yet another film from the production house in the form of the year's most awaited film Prem Ratan Dhan Payo.


Satish Sundaresan of Bollywood Hungama caught up with the talented Anupam Kher for an exclusive one-on-one with him. Here are the excerpts of the same.


Anupamji, to start with, Prem Ratan Dhan Payo, which got released during this year's Diwali, has turned out to be a firecracker and is all set to create history at the box-office. How

does it feel to be a part of 'history in the making'?

I am one of those luckiest actors who have been a part of historical and path breaking films. I am proud to be a part of films like Hum Aapke Hain Kaun, Dilwale Dulhania Le Jayenge, Ram

Lakhan and now... Prem Ratan Dhan Payo. The biggest grossers of the country have me in it in major roles. What else does one want! God is kind and we all are very happy. Prem Ratan

Dhan Payo is a great film. How many people make films which are narrative and has Indian values. Prem Ratan Dhan Payo has a scene on 'bhaidooj', which is very touching. Sooraj Barjatya

is a magician and I am really happy to be a part of this magic. I owe everything to Rajshris as I started my career with them in Saaransh.


You are someone who is known to be reading the script before saying yes to the film. Is there an exception in the case of 'Rajshri Films'?

Sooraj Barjatya and his whole family is the only reason for that. Tomorrow, even if he calls me to do a one scene role in his film, I will surely do it, because I completely believe in him as a

director and as a person.


Recently, you said that Prem Ratan Dhan Payo is Salman Khan's best work till date. What made you say that?

Salman Khan has grown up as an actor and as a person. You see his focus and dedication. When I saw Bajrangi Bhaijaan, I was floored by his performance. But, when you see Prem Ratan Dhan

Payo, you will know that he can carry off anything. Apart from his belief in Rajshri Films, the way he has emerged, not only at the box-office but also in acting, he is ready to reinvent

himself. Today, the position that he has reached is purely on the basis of his hard work and dedication.

Music has always been a USP of any Rajshri film. Prem Ratan Dhan Payo is no different. Which one is your personal favourite?

It has to be the title track (smiles).


Recently, Salman Khan delivered a monster hit in the form of Bajrangi Bhaijaan. And now, you went on record to say that "Salman Khan's Prem Ratan Dhan Payo will be a bigger

blockbuster than Bajrangi Bhaijaan". Does that mean, Salman Khan should take a break from action roles and do 'peaceful roles', at least for the time being?

Who am I to advise him! He has got his family and his father, who is his biggest advisor. Whatever he is doing, he is definitely in the right path as everything that he is touching is turning into


Do you feel that Prem Ratan Dhan Payo will be your career's best film?

In terms of collection, it will be. And in terms of films, I equally enjoy doing films with Neeraj Pandey and others.


In that case, which film is dearer to you: Rajshri's Saaransh or Rajshri's Prem Ratan Dhan Payo?

How can you compare two children or two parents! It's like asking who you love more: your father or your mother. It is really difficult to say that. While Saaransh gave me life, Prem


Ratan Dhan Payo gave me a reaffirmation of my hard work.


After Prem Ratan Dhan Paayo, what is next on your plate?

Right now, I will start shooting for M.S. Dhoni's biopic. Very soon, you will hear about an international film that I will be doing.