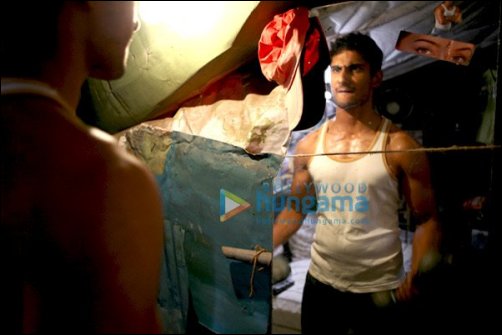 The industry is filled with strange friendships and they, the industrywallas, have their own well meaning way to pay tribute to their friends. Where Farah Khan always has one number in her films where all her friends would come together and dance on, other directors make their friends do a guest appearance; Aamir Khan on the other hand has his own unique way.

His friendship with Salman Khan is well known and he has made teasing references to Salman in Jaane Tu... Ya Jane Na and Peepli [LIVE] . Aamir has now made a third one in Dhobi Ghat. And it is in Prateik Babbar's character in the film.

Aamir Khan hit headlines with the song 'Pappu Can't Dance Saala' in his film Jaane Tu... Ya Jaane Na while in Peepli [LIVE] , one of the important characters wears Salman Khan's trademark bracelet.

This time, in his wife Kiran Rao's film Dhobi Ghat, Aamir has made Prateik's character in the film a devout Salman Khan fan. Aamir Khan loves Salman as a friend and his films are a proof of that.

Prateik is seen wearing the famous Salman Khan bracelet. In the film, he loves working out to build a body like Salman's and he wants to become an actor like him as well.

Prateik's character hails from a different city and is a part-time dhobi and a wannabe actor who thinks Salman is a cool dude.

Well Aamir, can this Pappu dance?