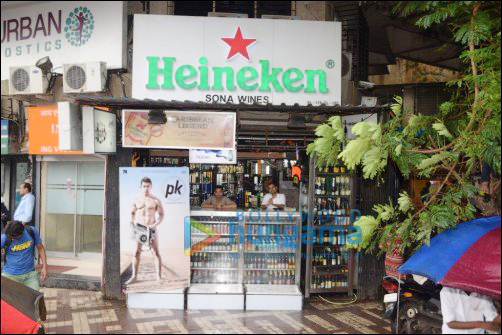 As the first look of PK hit the web, it was quite a shocker for everyone when they saw Aamir Khan posing almost nude in the poster of the film. Along with raising eyebrows, it also triggered many controversies and the talking standees of the same poster had to be removed from theatres owing to this issue. In fact, a case has been filed against Aamir Khan, producer Vidhu Vinod Chopra and director Rajkumar Hirani by lawyer Manoj Dixit in Kanpur accusing them of promoting vulgarity and nudity.

Though Aamir Khan went on record to say that the poster has a meaning that one will be able to understand only after watching the film, yet the actor and his poster has been a victim of many internet jokes. However, now we hear that despite the legal tangle and hullabaloo around the poster, the same will be seen in wine shops around the city. In fact, sources say that the wine shop owners want to cash in on Aamir Khan's popularity and have requested the makers to put up talking standees in their shops.

Wine shop owners feel that the standee is perfect for their shops and since it is the first talking poster ever, they want to use it to increase intrigue at the entrance of their shops. After a little discussion the makers have given a go ahead and it will soon be seen at various wine shops across the city.

Moreover, sources also claim that Aamir Khan will be seen playing the role of a drunkard in the film. And the standees will not only have this poster image of Aamir but will also see him talking in Bhojpuri when people go in front of it.