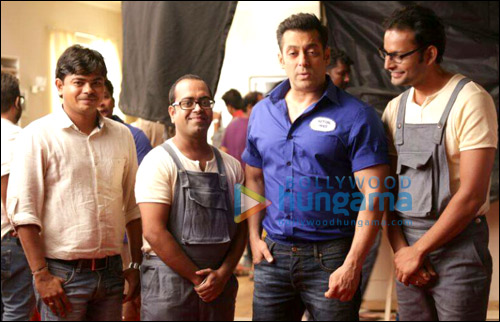 Salman Khan's recent release alongside Jacqueline Fernandez, Kick has been doing well at the box office. While the film that had a stellar run has crossed the Rs. 200 crore mark, the actor seems to be moving ahead sans a break. In fact Salman Khan was recently spotted shooting an advertisement for Astral Pipes. We came across these images of the actor obliging to pose alongside the artists on the ad shoot.


While the male artists who will also be a part of the advert were more than happy posing the actor, one of the girls on sets of the shoot simply couldn't keep her eyes off Salman Khan. Seen here, the girl in the orange top can't help but stare while Salman pays full attention to an explanation being delivered.

Salman Khan who was recently roped in as the brand ambassador for Astral Poly Technik Ltd, one of the leading manufacturers of plumbing and drainage systems, will next be seen in Kabir Khan's Bhajrangi Bhaijaan alongside Kareena Kapoor. Though the filming of the movie is yet to begin, it is expected to release on Eid next year.