Last month, Arjun Rampal took to social media to announce about the arrival of his baby with girlfriend Gabriella Demetriades. The couple has been dating for quite some time now and the two of them have expressed their happiness on more than one occasion. Now, Arjun has gone a step further and hosted a sweet baby shower for Gabrielle. 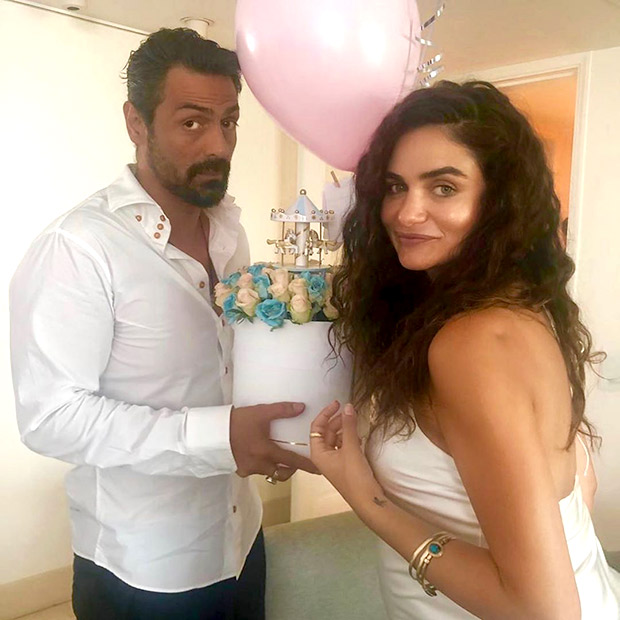 Gabriella Demetriades shared photos from the baby shower on her official Instagram handle. Amidst several photos, this photo of Arjun Rampal holding a cake for Gabriella definitely is one of the cutest. The cake for the baby shower was adorned with white and blue flowers, whereas, the mommy-to-be dazzled in a white dress! Amongst the guests was also Abhishek Kapoor aka Gattu who is quite close to Rampal and they have been buddies for years!

Arjun and Mehr got divorced last year and since, Arjun and Gabriella have been steady. A few weeks ago, he shared this happy news about his girlfriend being pregnant on social media and since then is being snapped with her almost regularly. He hosted a baby shower for her on Sunday and the theme for the same was white. Arjun also gave an interview where he said that last four years of his life were a living hell and his girl made everything right again by giving him a chance to be a dad all over again.

Arjun has two daughters Mahikaa and Myra who he claims have accepted his girlfriend as a part of the family. He said that it was very important that they support him and they have, no questions asked.

Blessed to have you all. Thank you to my girls @diva.dhawan @hannabannaboom @zoejaneblues @atiyarakyan @kom4186 for not cheesing out on me ????

A post shared by Gabriella Demetriades (@gabriellademetriades) on May 26, 2019 at 6:01am PDT

A post shared by Gabriella Demetriades (@gabriellademetriades) on May 25, 2019 at 4:26am PDT

Arjun Rampal and his ex-wife Mehr Jessia are said to be on good terms post their divorce. And Mehr is even said to have expressed her happiness over the arrival of Arjun and Gabriella’s baby. The couple had recently been to Maldives for their babymoon and they had also shared a few pictures as they enjoyed this beachy summer vacay.

Also Read: Arjun Rampal and girlfriend Gabrielle Demetriades take off to Maldives for babymoon and the photos are oh-so ROMANTIC!!!