Sonam Kapoor, who is currently in London, is not enjoying family time with her husband, siblings and mother but it seems that the actress took off to the England capital for a reason. Going by the latest social media posts, Sonam is there to attend the wedding of her cousin Priya Singh who is expected to tie the knot with Ranbir Batra. It seems that the actress was more than happy to give the world a glimpse of this dreamy summer wedding by posting photos on social media. 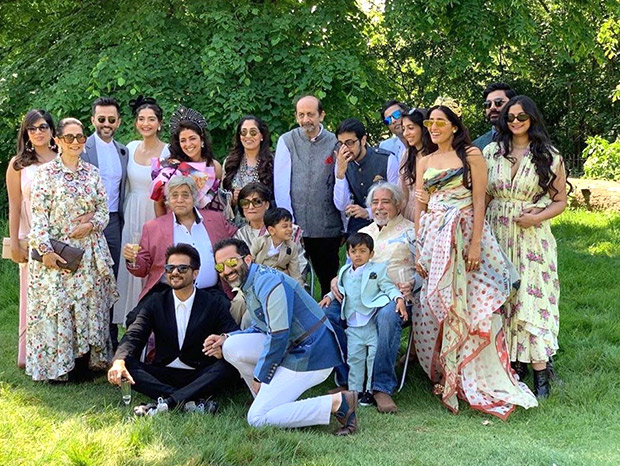 Woah! Sonam Kapoor shares this ‘picture-perfect’ family portrait of the Kapoors from a dreamy summer wedding in London

After attending Cannes 2019 and walking the red carpet at the French Riviera, Sonam Kapoor is currently in London, having a gala time with her family. The actress shared this adorable picture perfect family portrait which had her own parents, Anil Kapoor and Sunita Kapoor, along with her husband Anand Ahuja and sister Rhea Kapoor. Besides Rhea, was her alleged beau Karan Boolani who attended the ceremony at the England capital. Apart from them, as Sonam shared the others included the Singhs and the Bhambanis.

She also shared a few pictures of the bride and groom too along with a rather heart-warming caption!

The princess met her perfect soulmate and they lived happily ever after with all her dogs, eating the best food , the best wine and being merry! Thank you for the most beautiful time Priya didi and Ranbir! You make a beautiful pair! And a special tribute to both of you in the words of Tina Turner “You're simply the best Better than all the rest Better than anyone Anyone I've ever met I'm stuck on your heart I hang on every word you say Tear us apart Baby, I would rather be dead”

On the film front, after Ek Ladki Ko Dekha Toh Aisa Laga, Sonam Kapoor shifted her attention to The Zoya Factor starring Dulquer Salmaan. The film has been in the making since then and is expected to release this year itself, on September 20.