We all know that Sara Ali Khan had spoken about her wanting to date Kartik Aaryan on the chat show Koffee With Karan 6. Since then, there have been many reports about the two of them making appearances. It fueled up further when the two of them were brought together for a romantic drama, which is tentatively titled Love Aaj Kal 2, which is directed by Imtiaz Ali. And now, fans of the duo are going gaga over a series of pictures that were clicked with the two of them in a car! 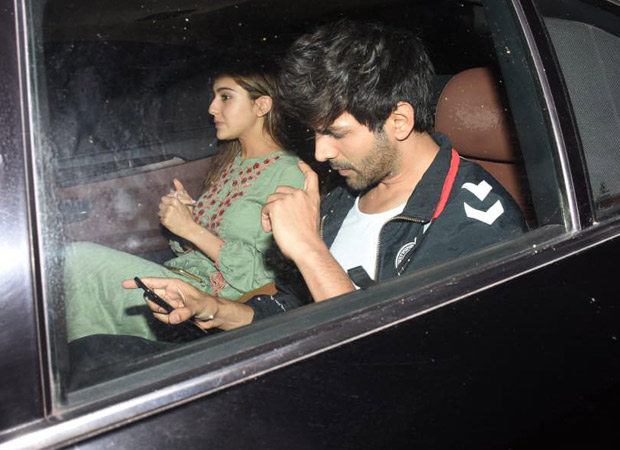 These photos of Sara Ali Khan and Kartik Aaryan are holding hands are making fans go gaga all over!

By now, everyone is aware that Sara Ali Khan and Kartik Aaryan have started shooting for the Imtiaz Ali film and are often snapped together post pack-up. But the reason why these set of pictures have grabbed attention is because Kartik was seen holding Sara’s hand. If one looks at one of these pictures carefully, we see the actor comfortably holding his co-star’s hand but as soon as they see the camera, he lets go of it immediately and tries to duck in.

This series of pictures have found their way online on several social media platforms as fans are going gaga sharing it on these platforms! While the two of them are snapped together driving post pack up quite a number of times recently, fans are surprised with these set of pictures and it has got them wondering about what’s cooking between these two actors?

Earlier there were also reports about Kartik Aaryan dating Ananya Panday. But soon it was announced that the two of them too are coming together for Pati Patni Aur Woh remake.  Coming to this Love Aaj Kal sequel, the film is expected to hit the theatres during Valentine’s Day next year, on February 14, 2020.