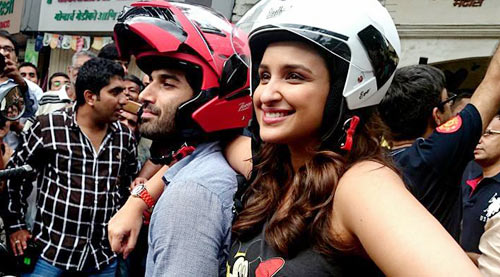 "I've never seen Taj Mahal," echoed Aditya Roy Kapur and Parineeti Chopra in a Bollywood Hungama exclusive video interview in a moving car on the Mumbai-Ahmedabad highway as they kick started their Food Yatra from Mumbai to Ahmedabad today. Agra is one of the destinations where the Daawat-E-Ishq duo will be visiting as part of this Yatra. "I'm going to do all the touristy things at the Taj Mahal," Parineeti said.

After a sumptuous breakfast at Cafe Madras in Matunga, Aditya and Parineeti got onto a bike and zipped through the road. Parineeti interacted with journalists who were following them in their respective cars. "She was doing the smiling and being polite and I was abusing half the drivers for coming in my way," Aditya said. Out of the blue it started raining and Aditya and Parineeti had to get into a car. "It's going to be quite grueling for all of us. We've been up since 5 in the morning but we are very excited. I have done road trips but nothing so extensive. Mumbai to Chandigarh will be long," Parineeti purred.

The lunch at the National Award winning Parsi Da Dhaba at Talasari was spicy and scrumptious. Chicken Dhansak, Prawn Rice, Kulfi and Lassi were a delight to savour. Aditya asked the Chef if they could pack some delicacies for his Mom and send them over today. With heavy duty eating and sinful delicacies, how will you guys deal with the guilt-gnawing-calories? "I will have to hit the tread mill everyday for half an hour at least so that whatever damage I am doing every day I can nullify it to sixty seventy percent," said Aditya who has to sport a lean physique for his next film Fitoor and is carrying mobile gym equipment with him to ensure he doesn't lose out on his exercise. "I'm going to be inspired and I'll go with Aditya. I don't want to put on weight either so I'll hit the tread mill as well," Parineeti added.

The Food Yatra is very special for Parineeti since she would be having lunch with her family at her home town in Ambala on September 16. "I'm very excited about going to Ambala, just to show you guys where I've grown up," Parineeti said excitedly as Aditya smiled. This is just the beginning, this Food Yatra promises a lot more. So keep watching this space for a lot many more updates.