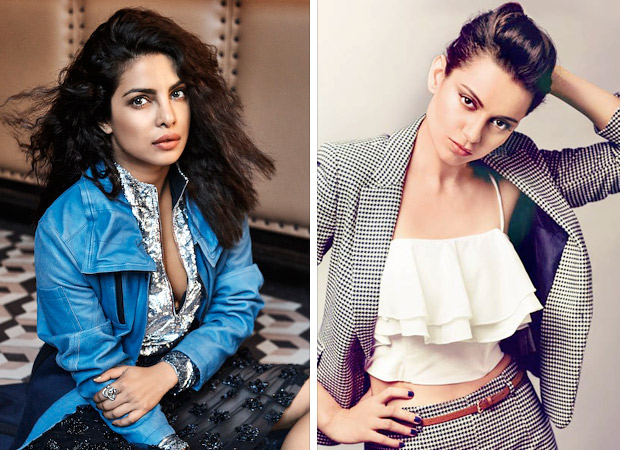 During Simran’s promotions, it seems that a year old controversy that was fuelled by Kangana Ranaut once again has caught on. The actress has come out in the open to talk about the blame-game and defaming notices with co-actor and alleged former boyfriend Hrithik Roshan and many of her statements in interviews have been making headlines. Recently, when Priyanka Chopra was asked about one of Kangana’s statements, even though indirectly, not only did she not agree with it but also sort of took a dig at her co-star.

It is a known fact that Priyanka Chopra is currently busy with her Hollywood projects. The actress was recently a part of the Toronto Indian Film Festival which not only honoured her but also held a screening of the actress’ Sikkimese production Pahuna. When she was being interviewed there, Priyanka was asked if she wanted to become an autonomous brand, like Kangana Ranaut who had mentioned of ambitiously wanting to become one, but Priyanka denied having any such dream.

The actress was of the opinion that she has no intentions of becoming someone who wants her name to be a part of everything. While she maintained that she hasn’t taken any formal education or schooling to become an actor or a producer or filmmaker, she runs her production house on the basis of instincts and work experience.

Kangana Ranaut had also maintained that she wanted to be a part of the top A-listers like the boys are and to the same, Priyanka stated that while she doesn’t think much about what the boys do, her aim is to work with experts in the field of filmmaking and make collaborations that are successful. On the statement made by Kangana about filmmakers having fragile egos, PC maintained that everyone in the industry does have fragile egos but she has never had a problem dealing with them.

Priyanka Chopra was also all praises for filmmakers she has worked with and she specifically named Vishal Bhardwaj, Sanjay Leela Bhansali, Anurag Basu, Rakesh Roshan and maintained that she has always come across amazing collaborators. She also asserted that she doesn’t step into anyone’s shoes but at the same time agreed that she does make suggestions but it is upon the filmmaker who if finds it sensible will take it further. Stating that she isn’t fighter in that manner, the actress also added that she is honest when she is asked for an opinion but she is not honest with a boxing glove. She prefers a zen and peaceful environment whilst working in a film.