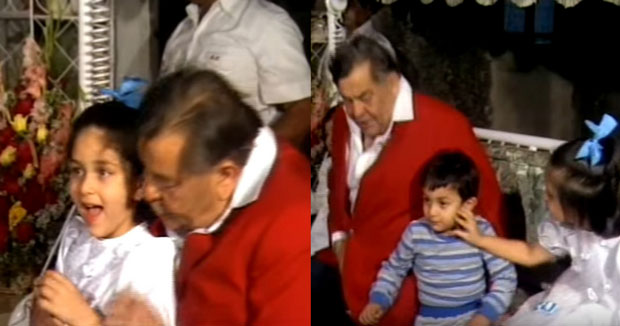 Some memories never fade way. Bollywood celebrities have millions of fan following who always want to know more about their idols. These throwback pictures and videos are the best way to relive those memories that give a glimpse of what the stars looked like before they got in showbiz.

We all know the Kapoor family has been a prominent part of the industry for decades. It is obvious that fans have always been keen to know more about their family. They look forward to old photos and videos. So it's no wonder that the Internet is gushing over this old video of toddlers Kareena and Ranbir.

An old video has surfaced online featuring little Kareena and Ranbir and his sister Riddhima Kapoor celebrating their grandfather Raj Kapoor's birthday. It was shown to Kareena Kapoor Khan on the chat show Rendezvous with Simi Garewal many years ago. The video features a doting Raj Kapoor and his three adorable grandchildren who don't want to leave his side.

Now, cut to 2017, Ranbir Kapoor and Kareena Kapoor Khan are at the top game in the industry. On the work front, Ranbir will be seen in Anuraj Basu's Jagga Jasoos and Rajkumar Hirani's Sanjay Dutt biopic. Kareena, on the other hand, will be seen in Sonam Kapoor starrer Veere Di Wedding.