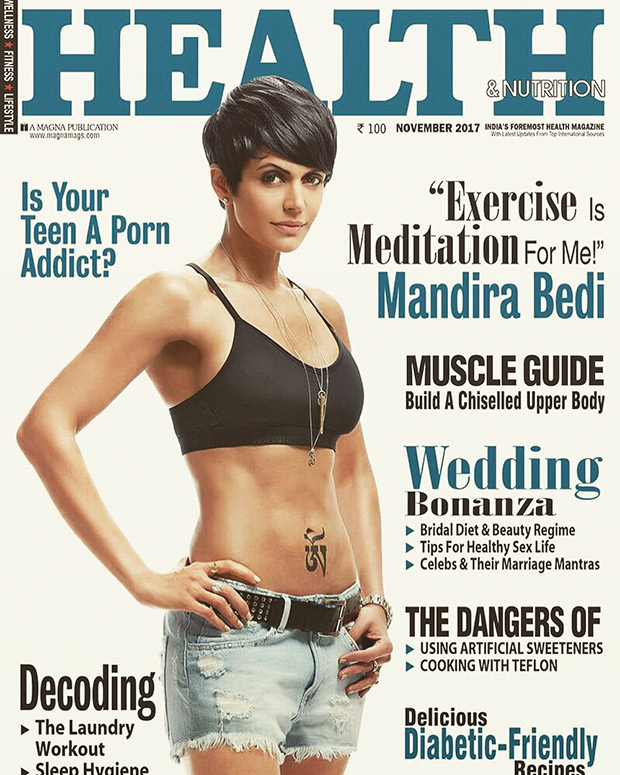 Mandira Bedi was seen as a coy, demure girl-next-door when she debuted on television with ‘Shanti’. Even in her debut film, Dilwale Dulhania Le Jayenge, her character was that of a simple, homely girl. But all changed in 2003 when she hosted the show ‘Extraaa Innings’ during the ICC Cricket World Cup 2003. Her style statement, love for sarees and her sex appeal became her new identity and ever since, her previous avatar became a distant memory. In the years to come, Mandira became quite health conscious and is today one of the fittest actors around.

It’s no surprise hence that Mandira Bedi has been featured on the cover of the Health & Nutrition magazine’s latest issue. Mandira looks extremely sexy as she poses confidently. Her black top, denim shorts and accessories give a great touch and also the tattoo on her midriff. The boyish-style hair cut has become Mandira Bedi’s identity since a few years and it continues in this picture as well.

Mandira Bedi was recently seen in the suspense drama Ittefaq in a small role as Akshaye Khanna’s wife. Prior to that, she achieved a lot of praise for her role of Nikita Rai in Anil Kapoor’s fast-paced action flick show ‘24’. Mandira essayed the role played by Mary Lynn Rajskub in the original. The latter in fact wanted to feature in the Indian version of ‘24’ as well but Anil Kapoor declined, reasoning that he has found a better Indian actress for her part, referring to Mandira Bedi! However, Mandira wasn’t seen in second season of ‘24’. Her upcoming film is the big-budget tri-lingual Saaho, co-starring Prabhas and Shraddha Kapoor.

MAMAMOO’s Hwasa looks breathtaking on the…