Last Updated 06.12.2022 | 6:32 PM IST
feedback language
follow us on
Bollywood Hungama » Movies » Movie Reviews » Saaho Movie Review: Though the Prabhas - Shraddha Kapoor starrer SAAHO suffers from a lackadaisical script and a vacuous screenplay it is bound to have a huge start and a good extended weekend.

Saaho Movie Review: Though the Prabhas Shraddha Kapoor starrer SAAHO suffers from a lackadaisical script and a vacuous screenplay it is bound to have a huge start and a good extended weekend.

Sometimes, one film is enough to turn an actor into a nationwide star. BAAHUBALI - THE BEGINNING was one such film. It made Prabhas from a regional star to a pan-India sensation and it’s sequel BAAHUBALI 2 - THE CONCLUSION cemented his position as a superstar. Almost 2 ½ years later, this macho actor is now back with SAAHO. While BAAHUBALI was a period drama, SAAHO is a modern-day actioner with a bit of a futuristic setup. The hype is tremendous from East to West, North to South. So does SAAHO live up to all the excitement? Or does it disappoint viewers? Let’s analyse. 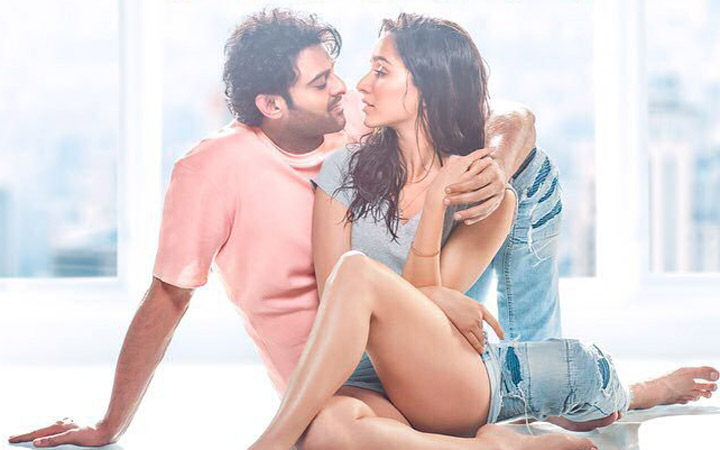 SAAHO is the story of a mysterious man on a mission. The foreign city of Waaji is ruled by gangsters and criminals and the biggest of them is Roy (Jackie Shroff). He cleverly manages to get the approval of an Indian minister, Ramaswamy (Tanikella Bharani) for a hydro project in India. He then reaches Mumbai and this is where he’s killed in a road accident. His son Vishwank (Arun Vijay) then takes over, which angers Devraj (Chunky Panday) as he wants to sit on Roy’s throne. Meanwhile the Mumbai crime branch is investigating the death of Roy and other related crimes. The case is handed over to Ashok Chakravarthy (Prabhas), a macho and extremely intelligent officer. He insists that Amritha Nair (Shraddha Kapoor) is also made a part of his team after he gets smitten by her photograph. While scanning the CCTV footage, they come across a mysterious person (Neil Nitin Mukesh) who they believe is a suspect. In the absence of evidence though, he can’t be arrested. Ashok however manages to speak to him and finds out that he’s hunting for a black box which can be used to access the wealth left by Roy in Waaji. Not just this chap but even Vishwank is trying to find the black box, which is hidden in Mumbai. He sends his associate Kalki (Mandira Bedi) who for some reason secures the box but instead of taking it to Waaji, she deposits it in a bank. When the mysterious person comes to get it, the cops who are already on his trial arrest him. However, the cops get a shock of their lives at this point when they realize they have a mole in their team. The mole runs away with the black box and this baffles not just the police force but also the gangsters of Waaji. What happens next forms the rest of the film.

Sujeeth's story is strictly okay but it could have been made for an exciting actioner if the screenplay and direction were upto the mark. Sujeeth's screenplay however spoils the show. Till the first half, it is captivating but then the screenplay is all over the place in the post-interval portions. There are so many villains and moreover, there are so many people double-crossing that it gets confusing for viewers to remember the twists. Abbas Dalal and Hussain Dalal's dialogues are simple but a few one-liners are powerful.

Sujeeth's direction is quite weak and it is one of the big reasons why this film fails. A film like SAAHO, mounted on such a huge scale, required the execution by an expert and experienced filmmaker. Sujeeth sadly fails to do justice. The plot is weak but still, the film could have been saved with the execution. Sujeeth fails to do so overall. On the positive side, a few scenes are handled very well. These are mainly in the first half like the entry scenes of Vishwank and Ashok, Devraj threatening his father Prithviraj and of course, the interval point. In the second half, he does very well in a brief part of the climax where three scenes are running parallel - one of Ashok, one of Amrutha and one of Kalki. If he had wisely directed the rest of the film, SAAHO would have been on another level.

SAAHO has an average beginning. Too much information is laid out and it takes a while to process it all. The film gets a bit better with Ashok’s entry. The investigation carried out by Ashok and his team is quite engaging. Also, the politics played out in Waaji amongst the warring factions makes for a nice watch. The best is however reserved for the pre-interval. The sequence where Kalki’s car gets attacked is good. The intermission point comes as a jolt. A part of it is predictable but there are too many twists here and hence, it works since viewers won’t be able to guess all the unexpected developments. Post-interval, one expects the film to go on another level but sadly the opposite happens. There is too much chaos, visually and otherwise, and the film ceases to make sense. Yes, the action scenes are spectacular but after a point, the audiences get tired of the overdose. There are more twists in the climax but this time, the viewers don’t get very impressed.

Talking of performances, Prabhas puts up a great show. As per his character, he performs well and would be loved by the masses. His dialogue delivery in Hindi however is a bit weak. Moreover, his character sketch is also a bit flawed – throughout the film, his character is always winning and ahead of his enemies. Initially, it works but then it becomes unconvincing. Shraddha Kapoor is quite lovely and suits the part of the no-nonsense officer very well. She is great in action scenes. Jackie Shroff makes a huge impact in his cameo. Neil Nitin Mukesh is dependable and looks quite dashing. Chunky Panday steps into the villain zone once again after BEGUM JAAN and is appropriate. Arun Vijay oozes fear very well and is apt for the part. Murali Sharma (David) has a crucial part and is decent. Mandira Bedi gives a memorable performance. Tinnu Anand doesn’t mouth a single dialogue and yet delivers a fine performance. Mahesh Manjrekar (Prince), Prakash Belawadi (Shinde) and Goswamy (Venella Kishore) are okay. Evelyn Sharma (Aisha) suits her part but her character doesn’t have much to do. Jacqueline Fernandez is sizzling in the special song.

Music is average. 'Psycho Saiyaan' (changed to 'Kaiko Saiyaan') is the best song of the lot and well shot and choreographed. 'Enni Soni' and 'Baby Won't You Tell Me' are forced in the narrative. 'Bad Boy' is visually quite stunning. Ghibran's background score is a bit loud. In a few places, it overpowers the dialogues. Raju Sundaram and Vaibhavi Merchant's choreography is first-rate.

Sabu Cyril's production design is ambitious and larger-than-life, especially the Waaji city portions. But it doesn’t seem authentic. R C Kamalakannan's VFX could have helped in making it look real but it fails at places. Thota Vijay Shankar and Leepakshi Ellawadi's costumes are appealing, especially the ones worn by Prabhas, Shraddha Kapoor and Jacqueline Fernandez in the songs. A Sreekar Prasad's editing adds to the chaos and could have been simpler.

On the whole, SAAHO suffers from a lackadaisical script and a vacuous screenplay. At the box-office, it is bound to have a huge start and a good extended weekend due to tremendous hype and the fan following of the lead cast but will face obstacles post the weekend.

Infographic: Baahubali 2 to Pushpa - Here are the Top 5 Hindi dubbed South films that have made it big at the India box office

One year of Saaho: PAN-India star Prabhas pens a heartfelt message for fans and team of Saaho

“Yes I am getting married in August,” Saaho director Sujeeth confirms his engagement

Post Saaho, no Hindi version for Prabhas’ next Jaan

Very good movie .. need some brains to understand though

I don't know why there are such negative comments for saaho coming. first of all our people started…