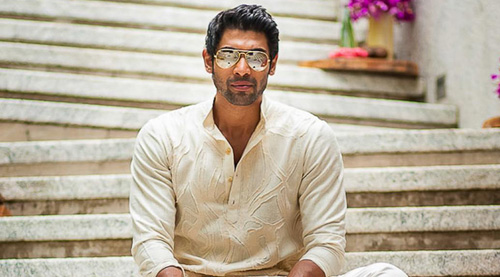 Magnum opus - This is what comes to mind the moment one hears of Baahubali. In the making for three years and being in news practically every week, the S.S. Rajamouli

film could well be the Mughal-e-Azam of the millennium. No wonder, all involved with the film await its verdict with bated breath as there is nothing more exciting than watching a biggie unfold on

screen which also matches the gargantuan expectations associated with it. For Rana Daggubati, the antagonist of the film, it is a huge milestone too as he has let go of quite a few lucrative films,

and that too across languages, for one Baahubali.

Guess this is one film that has seen its share of sacrifices by its cast and crew, isn't it?

Exactly. Everyone is doing something as big like this for the first time. Everyone is discovering this magnum opus production. Everyone has given heart and soul to it. As an actor I still did

Tamil, Telugu and Hindi films during last three years but even then I had to let go of a few. As for Prabhas, who is a top star down South, he just left cinema for 3-4 years. He gave himself

entirely to Baahubali. Anushka (Shetty), Tamannaah - everyone was on board completely.

In the film you have Prabhas as another leading man. How does the camaraderie play with him?

It is a tale of two cousin brothers where both have equal rights over the throne. Rajamouli found us as he wanted two big guys around (laughs). Somewhere, we became brothers after working for so

long. In the film though, both of us indulge in classic sibling rivalry. Of course, ultimately good prevails over evil. We have shot and told the film as a visual spectacle.

Talking of spectacle, you are also a part of quite a few war sequences. Did you totally let your hair down while playing out with swords and all?

Fully (smiles). We took extra care to make it look and feel like an Indian war. We had to go through a lot of training for that. As a matter of fact, we also created our own weapons. The final war

sequence was shot for a staggering 120 days. It was a physically strenuous experience. But then it was all worth it.

While you are in the middle of all the war, how about love? Is there any romantic angle for you in the film?

(Laughs) No, there is no romance for me. I just have my eyes on the throne.